Defense accord with US a ‘security cover’ for PH | Global News

Defense accord with US a ‘security cover’ for PH 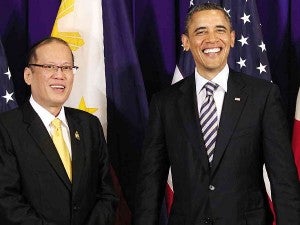 The new defense agreement the Philippines and the United States could sign on or before the visit of US President Barack Obama later this month is designed as a “security cover” for the Philippines amid the changing security landscape in the region.

This is how a ranking government official privy to the talks described to the Inquirer the “Agreement on Enhanced Defense Cooperation” that gives, among other things, a boost to the minimum defense capability posture of the Armed Forces of the Philippines.

“It’s more for deterrence, a security cover for the Philippines,” said the official, who requesting anonymity for lack of authority to speak to reporters.

“We are taking our neighbors into account as well,” the official added, without referring to  China with which the Philippines is locked in a bitter territorial dispute in the West Philippine Sea, the part of the South China within the Philippines’ 370-kilometer exclusive economic zone.

The United States has openly challenged China’s claim to 90 percent of the 3.5-square-kilometer South China Sea and sided with the Philippines as well as Japan in the territorial disputes.

Japan and China are both claiming ownership of the Senkaku Islands (called Diaoyu Islands by China) in the East China Sea.

According to the official, the draft agreement does not yet spell out how exactly the US military could boost the AFP’s capability, but “we are headed toward that.”

The official noted that the press statement released by the Department of National Defense (DND) on Friday used exact words that would appear in the text of the agreement, as it announced the end of the eighth round of talks where consensus on key provisions and modalities in the security deal were reached.

These are the “very critical points” in the agreement, the official said.

The exact lines in the agreement that were quoted in the defense department’s statement were:

The US access to and use of AFP facilities and areas will be “at the invitation of the Philippines and with full respect for the Philippine Constitution and Philippine laws.”

That the United States and the Philippines both understand that the US will “not establish a permanent military presence or base in the territory of the Philippines.”

That the United States agreed that any equipment and matériel that the US military may bring into the country “shall not include nuclear weapons.”

The official said inclusion of the phrase “at the invitation of the Philippines” in the agreement for the US military use of AFP camps “is a nod to Philippine sovereignty.”

The Philippine negotiating panel is ready to submit to President Benigno Aquino III the draft provisions on the key points in the agreement, raising speculation that the new security deal would be signed during or before Obama’s visit on April 28 and 29.

But Malacañang said yesterday that there is no rush to finish the agreement in time for Obama’s visit.

Speaking on state-run radio, deputy presidential spokesperson Abigail Valte said President Aquino wanted to make sure the new agreement would be consistent with the Constitution.

“There is no deadline. [T]he instructions of the President is … to make sure … everything is laid out well and nothing [is] overlooked,” Valte said.

Asked to state categorically whether the agreement was being rushed so that it could be signed while Obama is in Manila, Valte replied, “At least not for the Philippine side.” With a report from Norman Bordadora

PH, US agree on bases use