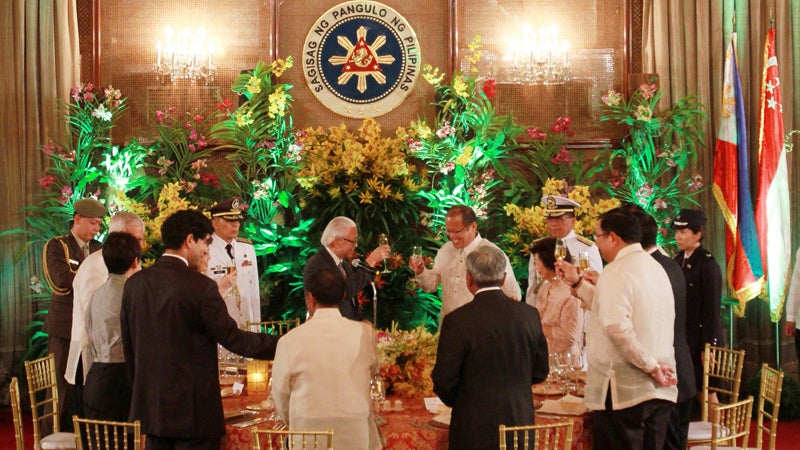 “The Philippines proposed the holding of a defense dialogue to further strengthen our cooperation,” said Aquino at the Palace reception hall. “I believe that strengthening defense and security cooperation between the Philippines and Singapore is key to maintaining regional stability.”

This year marks the 45th anniversary of the two countries’ diplomatic relations.

After filing a memorandum with a United Nations tribunal challenging China’s “nine-dash line” claim in the international waterway on Sunday, the Philippine government drew a sharp rebuke from Chinese Embassy officials in Manila.

Charge d’Affaires Sun Xiangyang said the move “seriously damaged” the bilateral relations between the two countries, and accused the Philippines of unilaterally shutting the door to negotiations and consultations.

China, Taiwan and Asean members the Philippines, Brunei, Malaysia and Vietnam have overlapping claims in the South China Sea, which Beijing claims in its entirety.

Tan said he and Aquino also discussed developments in the Association of Southeast Asian Nations (Asean).

“As founding members of Asean, Singapore and the Philippines share a common vision of building a strong, united and stable Asean community. And we will continue to work closely to promote the common interests of our region,” he said.

The two leaders, however, did not discuss the overlapping claims of some Asean countries and China in the South China Sea, Communications Secretary Herminio Coloma Jr. said.

But they talked about reviving the Philippines-Singapore Action Plan to expand bilateral relations.

“I look forward to the implementation of initiatives in these areas, knowing that it would have a positive impact on relations between the Philippines and Singapore,” Aquino said.

Later at the state luncheon for Tan and his delegation in Malacañang’s Rizal Hall, President Aquino said the visit reaffirmed the “deep friendship” between the two countries.

“It also serves as an opportunity to explore areas of cooperation, areas that will allow us to realize in full the potential of our partnership on both the bilateral and Asean levels,” he said in his toast to Tan.

Tan, in his toast to Aquino, said both countries shared an interest in building a “strong” and “united” Asean community.

“A warmer landscape has evolved since the time when we were founding members of Asean. The strategic imperatives remain unchanged,” Tan said.

“In fact, these imperatives have grown more compelling in the face of new challenges confronting our region,” he added.

Aquino said the Philippines’ increasing competitiveness has created an environment conducive to growing trade between the two countries.

“We are indeed encouraged by the increasing presence of both Philippine and Singaporean companies in each other’s countries, and we believe this bodes well for the future,” he said.

He invited Singapore to increase its participation in the Philippine business sector through the Philippines-Singapore Business Council that was launched in 1994.

Tan congratulated Aquino for steering the peace talks with the Moro Islamic Liberation Front to a final agreement on a Bangsamoro entity in Mindanao.

Read Next
China warned: Don’t try to tow away BRP Sierra Madre
EDITORS' PICK
Get 80% OFF Ignite 2020 Cyber Tickets starting 28 September
Despite toll, never too late to fight pandemic—WHO chief
Feud is over: Velasco next Speaker on Oct. 14
Smart poised to turn PH into ‘Smart 5G country’ with nationwide rollout
House to probe Facebook takedown of gov’t accounts
Water remains our saving grace right now
MOST READ
Velasco to take over as Speaker on Oct. 14
2 PDP-Laban allies in House jump over to Lakas-CMD
Duterte meets with Cayetano, Velasco amid speakership issue
SAP is over: P6B allocated under Bayanihan 2 law for DSWD to fund livelihood aid – DBM
Don't miss out on the latest news and information.