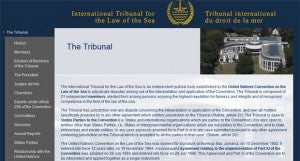 MANILA, Philippines – The Philippine government on Sunday filed a 4,000-page memorandum on its claims on the West Philippine Sea before an international court, the Department of Foreign Affairs (DFA) said.

Foreign Affairs Secretary Albert del Rosario confirmed that it sent the thick document, which includes 40 maps as evidence, to the International Tribunal on the Law of the Sea (ITLOS).

Earlier in the day, Communications Secretary Herminio Coloma announced, “Today the government formally filed a memorandum at the arbitral tribunal of the United Nations Convention on the Law of the Sea (UNCLOS).”

Coloma explained that the memorandum or memorial – in the language of international law – contains the legal basis and other arguments on the country’s claim on parts of the West Philippines Sea.

“The purpose of the memorial is our national interest. It is about defending what is legitimately ours. It is about securing our children’s future,” he said in a televised press conference.

The Philippines was ordered by the ITLOS to submit its memorial on or before March 30, 2014 after filing a case in 2013 against China.

However, the Secretary said they are not sure if China will address the case of again abstaining from the proceedings.

Both countries claimed the Spratly area as part of their territory.

The dispute has resulted in standoffs and heightened tension in the region, including the most recent incident on Saturday when Chinese Coast Guard ships attempted to block a civilian vessel on its way to Ayungin Shoal.

The two-hour stand-off in the Spratly archipelago was the latest in a series of escalations in a dispute between the two countries over their competing claims to waters and islands close to Philippine landmass.

China’s claims over the strategically important South China Sea, believed to contain vast oil and gas reserves, overlap those of the Philippines as well as Brunei, Malaysia, Vietnam and Taiwan.

The Philippine case argues that China’s claims cover areas as far as 870 nautical miles (1,611 kilometers) from the nearest Chinese coast, and are thus illegal under the UN Convention on the Law of the Sea.

Manila notified the UN and Beijing in January last year that it would initiate arbitral proceedings, infuriating China which has refused to participate and warned that bilateral relations will suffer if the Philippines pursues the appeal.

Saturday’s incident took place at Second Thomas Shoal, where a small number of Filipino soldiers are stationed on a Navy vessel that was grounded there in 1999 to assert the Philippines’ sovereignty.

China had said its coastguard successfully turned away a similar Filipino attempt on March 9.

The Philippine foreign department said its plea to the UN would argue the disputed areas, including the Second Thomas Shoal, are part of the Philippines’ continental shelf over which Manila has sole sovereign rights and jurisdiction.

Both China and the Philippines are signatories to the UN Convention on the Law of the Sea, but Beijing has repeatedly said it has sovereign rights over the entire Spratlys as well as waters and other islets approaching its neighbors.

It has also accused the Philippines of illegally “occupying” Second Thomas Shoal.

The rocky outcrop is part of the Spratlys, a chain of islets and reefs that sit near key shipping lanes and are surrounded by rich fishing grounds.

Philippine military spokesman Lieutenant-Colonel Ramon Zagala told AFP on Sunday that the Filipino vessel was due to leave the shoal during the day after the Chinese vessels unsuccessfully prevented it from delivering supplies and rotating troops.

Asked if he expected further confrontation, Zagala said he did not know.

“We want them (boat and crew) to safely return,” he said.

Chinese foreign ministry spokesman Hong Lei stressed the country’s position on the South China Sea dispute, as well as a separate territorial row with Japan in the East China Sea, during a press briefing in Beijing on Friday.

“China is unswerving in safeguarding its territorial sovereignty. Meanwhile, we are committed to managing and resolving relevant issues through dialogue and consultation,” he said. With a report from Agence France Presse
RELATED STORIES