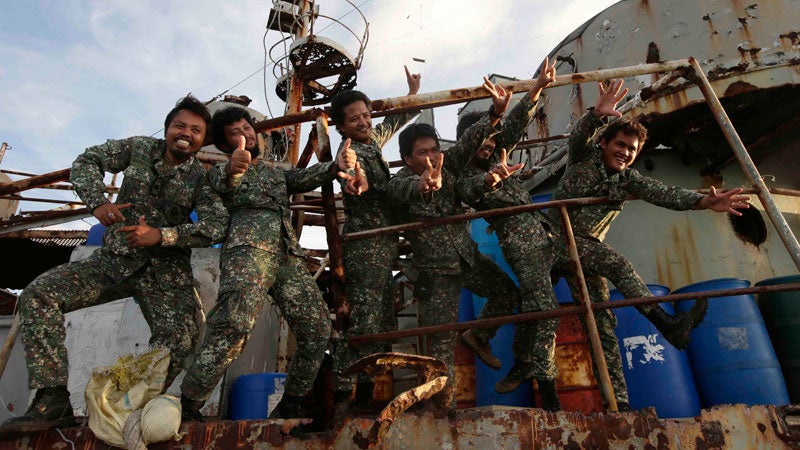 PLAYTIME. Philippine Marines, who have been staying for almost five months aboard the Philippine Navy ship BRP Sierra Madre on Ayungin Shoal, pose for a local television news crew. A China Coast Guard ship earlier tried to block a vessel that brought supplies and replacement troops on Saturday. AP

MANILA, Philippines—The Philippines, saying it was “defending what is legitimately ours,” filed Sunday a memorandum in the United Nations arbitration court on its territorial dispute with China, expanding its claim to include Ayungin Shoal, the current scene of confrontation between Manila and Beijing.

True to its word, the government met the deadline for submission of its memorandum, or memorial, which discussed its position that the arbitral tribunal has jurisdiction over all the claims made by Manila in the West Philippine Sea (South China Sea).

And from identifying eight West Philippine Sea shoals and reefs that form part of the Philippine territory that China has allegedly illegally occupied, the memorial included Ayungin Shoal in its statement of claim.

“The memorial presents the Philippines’ case on the jurisdiction of the arbitral tribunal and the merits of its claims,” Foreign Secretary Albert del Rosario said at a news conference.

“With firm conviction, the ultimate purpose of the memorial is our national interest. It is about defending what is legitimately ours. It is about securing our children’s future. It is about guaranteeing freedom of navigation for all nations. It is about helping to preserve regional peace, security and stability. And finally, it is about seeking not just any kind of resolution but a just and durable solution [based] on international law,” Del Rosario said.

He said it was “unknown” whether China would pursue its avowed policy of not taking part in the proceedings. Under its rules, he said, the arbitral tribunal will decide on the next action and advise the concerned parties accordingly.

The memorial consists of 10 volumes and contained nearly 4,000 pages, including 40 maps, he said. It was submitted electronically to the UN tribunal on Sunday—the deadline for submission—and hard copies will be sent Monday, he said.

Del Rosario and Solicitor General Francis Jardeleza declined to discuss the contents of the memorial, including recent incidents of alleged Chinese harassment, until given by the arbitral tribunal the go-signal to do so.

Jardeleza, who attended the news conference, said the government amended early last month its statement of claim to include Ayungin Shoal.

“It’s similar to the claims we’ve made that Ayungin Shoal is within the 200-nautical-mile exclusive economic zone of the Philippines,” Jardeleza said.

Manila has protested Beijing’s attempts to prevent the Philippines from providing supplies and rotating troops stationed at Ayungin Shoal.

With the inclusion of Ayungin Shoal in its statement of claim, the Philippines now says that China has illegally occupied nine reefs and shoals. The others are Mischief Reef, McKennan Reef, Subi Reef, Gaven Reef, Scarborough Shoal, Johnson Reef, Cuarteron Reef and Fiery Cross Reef.

Asked whether the tribunal could enforce its decision, Jardeleza said, “The Philippines has always taken the position that China as a member of the community of nations is bound legally to accept and implement it.”

“We hope we can get a favorable decision on this,” he said.

Jardeleza also said the government was hopeful that other Asian claimants to the South China Sea would “take a similar position like us.”

In a statement, Vice President Jejomar Binay praised Navy and Marines stationed at Ayungin Shoal for asserting the country’s sovereignty and rights.

“Despite our dispute with China, I am still confident that we can transcend the problem and remain steadfast friends with the global community based on mutual respect and the rule of law,” Binay said in a statement.

The Philippines took its territorial dispute with China to international arbitration in January 2013 after Chinese government ships took control of a disputed shoal off the northwestern Philippines. They asked the tribunal to declare China’s claims to about 80 percent of the strategic waters and Beijing’s seizure of eight shoals and reefs illegal.

Chinese Foreign Ministry spokesperson Hong Lei told a news conference on Wednesday that China would never accept nor participate in the international arbitration pushed by the Philippines.

While the Philippines has urged other claimants to join the case, none has so far publicly stepped forward. China, Brunei, Malaysia, the Philippines, Taiwan and Vietnam have overlapping claims across the busy South China Sea.

China has asked other claimants to settle the disputes through one-on-one negotiations, something that would give it advantage because of its sheer size and clout. It has also warned Washington not to get involved.

The disputes have periodically erupted into dangerous confrontations, sparking tensions and straining ties.

In the latest incident, a Philippine government ship slipped past a Chinese Coast Guard blockade on Saturday and brought food and fresh troops to a Navy ship marooned on Second Thomas Shoal and used as a base by Filipino troops to bolster the country’s territorial claims in the area.

The rocky outcrop is part of the Spratlys, a chain of islets and reefs that sits near key shipping lanes and is surrounded by rich fishing grounds. It is around 200 kilometers from Palawan province and about 1,100 km from the nearest major Chinese landmass.

In an interview over Radyo ng Bayan on Sunday, Communications Secretary Herminio Coloma was mum on whether the latest harassment of a Filipino civilian vessel would strengthen the government’s case in the tribunal.

Coloma only said the government remained focused on using “diplomacy and peaceful means to resolve the issue.”

Senate President Franklin Drilon on Sunday expressed support for the government action. “This is our only alternative because in reality, China is a big country,” he said in an interview over dzBB.

Akbayan Rep. Walden Bello said President Aquino should summon China’s Ambassador to the Philippines Zhao Jianhua. “The President should tell the Chinese ambassador that our government will not tolerate further aggressive acts,” he said.

Bello also suggested that the Philippine Air Force should deploy its P3 Orion aircraft based in Puerto Princesa to conduct a resupply mission and the Philippine Navy should beef up troops at the BRP Sierra Madre “to give China the message that we will defend Ayungin as part of our continental shelf.”—With reports from Christian V. Esguerra, TJ Burgonio, Gil C. Cabacungan Jr., AP and AFP