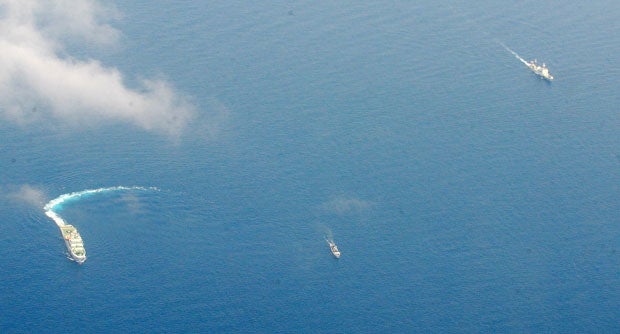 China Coast Guard ships (L and R) and a Philippine supply boat (C) engage in a stand off as the Philippine boat attempts to reach the Second Thomas Shoal (local name: Ayungin Shoal), a remote South China Sea reef claimed by both countries, on March 29, 2014. The Philippine ship finally slipped past the Chinese blockade to reach Second Thomas Shoal, where a handful of Filipino marines are stationed on a Navy vessel that has been grounded there since 1999 to assert their nation’s sovereignty. AFP

MANILA, Philippines—The Armed Forces of the Philippines on Sunday said it sent a government civilian ship to Ayungin Shoal (Second Thomas Shoal) over the weekend to avoid confrontation with Chinese naval forces patrolling disputed waters in the West Philippine Sea.

Lt. Col. Ramon Zagala, AFP public affairs office chief, maintained that the mission of the civilian vessel, which figured in a two-hour standoff with two Chinese Coast Guard ships on Saturday, was to resupply Marines manning the grounded Philippine Navy ship on Ayungin Shoal and replace them with a new team of soldiers.

“The objective was just to resupply our troops. The mission is done,” Zagala told the Inquirer in a phone interview.

“We sent a civilian vessel to avoid a confrontation [with the Chinese forces]. We simply want to reprovision and rotate our troops there,” he said.

“We used a civilian vessel to show them our intent, which was to reprovision and rotate our personnel, and nothing more,” Zagala said, adding that it was a regular mission.

Other countries with territorial claims in the South China Sea also resupply their troops, he said.

Until March 9, when the Chinese Coast Guard blocked a Philippine resupply mission to Ayungin Shoal, China never interfered in Philippine activities on the islets in the Spratly archipelago claimed by both countries.

The failed resupply mission was replaced with an airdrop, which was successful.

Saturday’s resupply mission was also a success, with the Bureau of Fisheries and Aquatic Resources (BFAR) vessel, carrying provisions and Marine and Navy troops in civilian clothes, as well as a group of journalists, outwitting two Chinese Coast Guard vessels that tried to block its way to Ayungin Shoal. 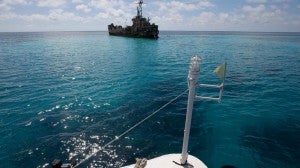 Being small and with a shallow draft, the BFAR vessel maneuvered to the shallows where the Chinese vessels, with their much bigger displacements, could not follow without the risk of running aground.

Then the BFAR vessel slipped through and proceeded to Ayungin Shoal.

Zagala declined to comment further on the incident so as not to inflame the already tense situation in the West Philippine Sea.

“The last thing we want is for our soldiers to think that we are abandoning them. We could have just turned back and [delivered] the supplies by air, but those would not last,” he said, adding: “We have to take care of them… because they have done so much for our country. They are in the service of the people. We cannot let them down. We simply have to push through with the reprovisioning.”

In an Agence France-Presse report, Zagala was asked if he expected further confrontation as a result of Saturday’s failed blockade. He said he did not know.

“We want them (the boat and crew) to safely return,” he said.

A statement issued by the DFA stressed that the Philippines has “sovereign rights and jurisdiction” over Ayungin Shoal, which it said was part of the country’s continental shelf.

Beijing has become more aggressive in asserting its claim over islands, islets, shoals and reefs in the West Philippine Sea—the waters in the South China Sea within the Philippines’ 370-kilometer exclusive economic zone—since Manila took the territorial dispute to the United Nations last year for arbitration.

China insists it owns nearly the whole South China Sea, even waters near the shores of its neighbors.

Ayungin Shoal marks the boundary of the Philippines’ territory in the Spratly archipelago.

The Philippine Navy grounded the rusting BRP Sierra Madre on the reef in 1999 to mark the country’s territory four years after China built structures on nearby, Philippine-claimed Mischief (Panganiban) Reef.

The ship is manned by a small team of Marines whose number the military keeps confidential but is believed to be less than 10.

Saturday’s confrontation off Ayungin Shoal occurred a day before the Philippines was due to file its memorandum on its case in the United Nations arbitral court in The Hague.—With a report from AFP