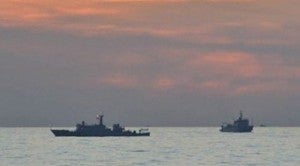 A global association of political parties has condemned China’s aggression in the West Philippine Sea (South China Sea), in a move the Philippines hailed as an “international expression of support” for its claim on isles in the disputed territory.

In a one-page resolution issued in Brussels,  the Centrist Democrat International (CDI)  said it “condemns the forcible takeover and occupation of the Scarborough Islets and the Ayungin Islands in the South China Sea” that the CDI said were “possessed and occupied by the Philippines as part of its continental shelf and within its exclusive economic zone.”

The CDI is an umbrella organization of political parties and groups working with democratic governments around the world.

It described China’s aggressive stance as an “open and brazen breach of its treaty obligations under the United Nations Charter and the UN Convention on the Law of the Sea, and of international law.”

The CDI urged China to “pursue peaceful, lawful and internationally sanctioned rules on dispute resolution to remove rising tensions in the region.”

Former Sen. Edgardo Angara, a CDI vice president for Asia-Pacific, introduced the resolution. It was unanimously adopted by the CDI executive board at its annual meeting in Brussels on March 19.

Angara, a member of the CDI executive council, gave the Inquirer a copy of the resolution titled “Emergency Resolution on the South China Sea Maritime Disputes.”

In a phone call from Brussels, Angara, the president of Laban ng Demokratikong Pilipino, said: “This is a very significant diplomatic move.”

He added: “We’re always at the receiving end. We react to what China [does] to us. For the first time, we have a positive, constructive international expression of support for our position.”

Asked about its implications, including its possible effect on the arbitration case lodged by the Philippines in the United Nations, Angara said: “The UN [arbitral] tribunal is composed of all these nations, and these nations will be on our side.”

It claims to be the largest political alliance in the world comprised of democratic countries.

Some of its members are the dominant political parties in Europe, including Christian Democratic Union of Germany, Conservative Party of the United Kingdom, Popular Party of Spain  and the ruling conservative governments of Ireland, Hungary and Greece.

In Latin America, centrist parties in Mexico, Brazil, Chile and Peru are the leading members.

Among notable leaders in the CDI are Chancellor Angela Merkel of Germany, Prime Minister Mariano Rajoy of Spain and Prime Minister David Cameron of the United Kingdom.

The resolution said the CDI “denounces China’s unilateral, forcible and violent takeover of the resource-rich islets and marine sanctuary [in the West Philippine Sea].”

It called on other nations to register a similar objection, warning that history’s destructive wars began when democratic nations “stood silent in the face of unlawful occupations of other nations’ territory.”

It said the world should remember the lessons of past occupations by condemning “territorial encroachments wherever they occur.”

It strongly urged China to “pursue peaceful, lawful and internationally sanctioned rules on dispute resolution to remove rising tensions in the region, and seek peaceful, rules-based solutions of the conflicting claims.”