• Victims can get help regardless of immigration status 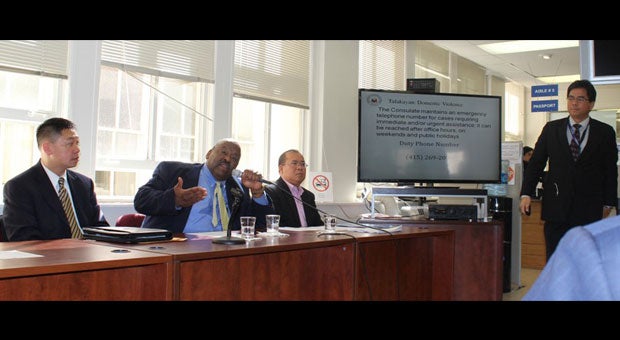 SAN FRANCISCO, California — “One out of four people is or will become a victim of domestic violence,” Lt. Randy Caturay, member of the San Francisco Police Force and the Alliance for Community Empowerment, recently told the audience at the Philippine Consulate in San Francisco.

Lt. Caturay stressed that domestic violence is considered a crime in the United States, and that the police will file criminal charges once it has been established that one partner has committed violence against another.

“The first step is calling 911,” District Attorney Investigator Raymond Tang reminded the audience.  “Calling 911 is the number one deterrent to the cycle of domestic violence.”  Both officers emphasized that charges could be filed against an offender regardless of the victim’s civil or immigration status in the United States.

Robert Yabes, program director and Roela Vasquez, immigration counselor at the Catholic Charities of Santa Clara County, supplemented the talk with information on immigration solutions for victims of domestic violence.

“A U-visa may be issued for [undocumented] persons who have become victims of a crime,” Yabes said.  On the other hand, victims who are permanent residents or are married to US citizens are covered under the VAWA (Violence Against Women Act).

Both courses of action provide immigration relief to immigrants and undocumented or out of status individuals who have become victims of domestic violence by providing them with options that would facilitate their applications for legal status in the US.

The speakers welcomed questions from the audience following their talk, including one from a woman whose niece was in an abusive relationship. Acting Head of Post, Deputy Consul General Jaime Ascalon, informed the audience that they would be available for a short time afterward for private consultations.

Ascalon said there are ways to get out of abusive relationships – regardless of one’s immigration status, civil status or gender.  “In that context, we deeply appreciate our community partners – FALEO, ALLICE and the Catholic Charities of Santa Clara County – for coming out here and sharing valuable information with our community,” Ascalon added.

Talakayan sa Konsulado is a monthly forum held at the Philippine Consulate General in San Francisco and organized in partnership with the Philippine American Press Club (PAPC) to discuss issues relevant to the Filipino community in the Bay Area.