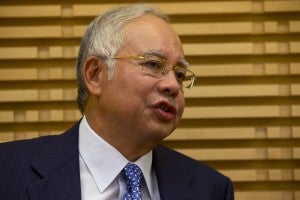 Citing information from the Department of Foreign Affairs, Malacañang confirmed, on Wednesday, Najib’s attendance at the signing ceremonies to be held at the Palace grounds fronting the Kalayaan Hall at 4 p.m. Thursday.

“We know for a fact that Malaysia is undergoing a crisis owing to the fact of the disappearance of the Malaysian airline,” Presidential Spokesperson Edwin Lacierda said in a press conference.

“Be that as it may, Malaysia is fully aware of its international commitments, and we thank them that despite the difficulty that they’re encountering, that they have accepted our invitation to grace the signing of the Comprehensive Agreement on the Bangsamoro (CAB).”

As of Wednesday, an international search effort had yet to recover what were believed to be debris from the ill-fated Malaysian Airline flight MH370. Najib earlier announced that the plane, which carried a total of 239 people, “ended in the southern Indian Ocean.”

The CAB will encompass all signed agreements, including the Framework Agreement on the Bangsamoro (FAB) in 2012 and the four annexes and addendum that came after that.

Before witnessing the signing of the CAB, Najib will sit down with President Aquino “to briefly discuss matters of mutual concern between the Philippines and Malaysia,” according to the DFA.

Najib last visited Manila in October 2012 also to witness the signing of the FAB, a crucial initial document in the peace negotiations.

For the government side, it will be chairperson Miriam Coronel-Ferrer, panel members Senen Bacani, Yasmin Busran-Lao and Mehol Sadain and consultants Zenonida Brosas and Jose Luis Martin Gascon.

Ferrer said Tuesday that Tengku Dato’ Abdul Ghafar Tengku Mohamed, who served as the Malaysian facilitator, would sign as witness.

“We decided to move it in the Kalayaan grounds where we believe we can hold, in our estimation, over 1,500 [guests],” Lacierda said.

“In so far as this administration is concerned, I think this will be the biggest [gathering].”

Lacierda said the Palace was aware of no specific threats intended to disrupt the signing of the CAB.

All set for peace deal signing