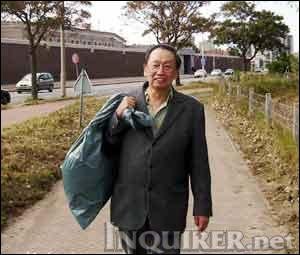 LUCENA CITY, Philippines—To break the current impasse on the peace talks between the government and communist rebels, exiled Communist Party of the Philippines Jose Ma. Sison on Wednesday has proposed that both parties should meet again to pave the way for the resumption of the aborted peace negotiation.

He said NDFP has already agreed to the proposal of Royal Norwegian Government to host another round of peace negotiation in the next few months.

Short of demanding the replacement of chief government peace negotiator Alexander Padilla and Presidential Adviser on the Peace Process Teresita “Ging” Deles, Sison called the two as “arrogant and lazy.” Asked for his basis, Sison has yet to reply though.

Sison said the government side should be represented by the likes of former government negotiating panel chairman and now 1-Bap partylist Rep. Silvestre H. Bello III and the late Tarlac Rep. Jose Yap.

“Dapat mga negotiators katulad nila Apeng Yap at Bebot Bello. May tindig sila sa panig ng GRP pero marunong sumalubong sa mga demands ng kilusang rebolusyonaryo alang-alang sa kabutihan ng mga mamamayan,” (It should be negotiators like Apeng Yap and Bebot Bello who are committed to the government side but know how to respond to the demands of the revolutionary movement for the sake of the people‘s welfare) said Sison.

He added: “Dahil kina Bebot at Apeng sa isang panig at si Louie Jalandoni sa kabila nagkaroon ng 10 agreements sa panahon ni Ramos. Pagkatapos nito, mga negotiators ng GRP o GPH ay mga arogante at antemano gusto nilang patawan ng surender at pasipikasyon ang kilusang rebolusyonaryo.” (Because of Bebot and Apeng on one side and Louie Jalandoni on the other side there were 10 agreements made during the time of Ramos. But the negotiators after them were arrogant and insistent at once on imposing surrender and pacification of the revolutionary movement.)

Sison recalled that during the term of former President Fidel Ramos, the two parties made headway in the peace negotiation by forging 10 agreements that served as the foundation for further peace talks.

Sison assailed the present policy of the Aquino administration with regards to the future of the peace negotiation.

Sison alleged that the Aquino government is determined to kill the peace negotiations “by always trying to attack and destroy the linkage between the NDFP Negotiating Panel and the revolutionary forces in the field.”

“It is consistent but stupid for them to claim falsely a disconnect between the NDFP Negotiating Panel and the forces in the field and to realize their own self-fulfilling prophesy by negating the JASIG (Joint Agreement and Safety Immunity Guarantees)-protected individuals who act as peace consultants and support the peace negotiations,” Sison said.

Sison warned that if the detained NDFP political consultants are not released, “the Aquino regime will only be killing the peace negotiations and inciting the NPA and other revolutionary forces to intensify the people’s war.”

“Is that what Aquino and his bureaucratic and military subordinates really want?” Sison asked.

Sison argued that the peace negotiation is still ongoing with the absence of formal notice of termination from both parties as mandated under Jasig signed in 1995.

(After the Carhrihl [Comprehensive Agreement on Respect for Human Rights and International Humanitarian Law] there is need for formal talks to discuss and agree on social and economic reforms which would follow the substantive agenda. Only then can the possibility of truce and cooperation be discussed even if only based on a general statement of common intent about the fundamental problems of the people).

Sison recalled that he had agreed to meet with Mr. Aquino since November 2012. But in the Amsterdam meeting of the government and NDFP delegations, Sison said the task to simply prepare the communique for a prospective meeting in Hanoi in April 2013 “was fouled up by a premature demand of Office of Presidential Affairs for Peace Process for a confused and baseless ‘indefinite unilateral simultaneous ceasefires’ instead of a possible truce and cooperation agreement to be worked out within three months after my supposed meeting with Aquino.”

“This aborted meeting had been presented to me by Political Adviser Ronald Llamas as a historic moment, similar to the Aquino-Murad meeting in Tokyo in August 2011. But Alex Padilla as agent of Deles sabotaged the delegation headed by Llamas by drawing attention away from the task of drafting the aforesaid communique in advance,” Sison said.

With NPA’s strength, peace talks an option for next president–Sison