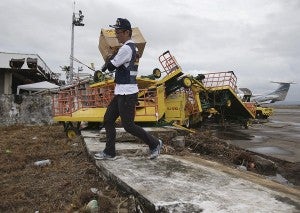 A member of the Japanese Disaster Relief Team carries goods as they arrive to assist in victims of Super Typhoon Yolanda in Tacloban City on Nov. 12, 2013. Officials of the world’s largest food humanitarian assistance agency expressed alarm on Thursday, March 20, 2014, over the admission last week of this Palo town mayor that she authorized the throwing away of food items intended for victims of Yolanda. AP File Photo/Aaron Favila

PALO, Leyte—Officials of the world’s largest food humanitarian assistance agency expressed alarm on Thursday over the admission last week of this town’s mayor that she authorized the throwing away of food items intended for victims of Super Typhoon “Yolanda” (international name: Haiyan).

“In a time when there are still pockets of food insecurity (United Nations jargon for hunger) here, that was absolutely not appropriate,” said a top official of the World Food Programme (WFP) in Eastern Visayas, who spoke on condition of anonymity because of the UN mandate of neutrality when they engage in humanitarian relief operations in the aftermath of disasters affecting their host nations.

The official was referring to Mayor Remedios Petilla’s statement last week that she authorized local officials to dump “at least four sacks of rice and two sacks of used clothing” after they spoiled and rotted in the municipal hall’s storage center. The items were found at the San Jose garbage site, 6 kilometers north of here.

“It was a minimal thing compared to the volume that we received.” Petilla had said, even as she called “malicious” reports by her political opponents to the press that truckloads of relief items composed of rice, canned goods and biscuits were disposed of.

Her admission, however, did not stop her critics and political detractors from making hay out of the recent controversy.

The reports have prompted several members of the Senate and the House of Representatives to call for an investigation amid a public outcry for greater transparency in the distribution of relief items.

Asked if she would support a citizen participatory audit (CPA), Petilla said: “Why, can’t the COA (Commission on Audit) do its job anymore?” The CPA is actually an undertaking of the COA under its present chair, Grace Pulido-Tan.

Petilla has served in various capacities as Leyte governor, House member and mayor for the past 19 years. Her son, Carlos Jericho, is secretary of the Department of Energy.

Eye of the storm

The controversial 75-year-old matriarch of the Petilla-Loreto political dynasty found herself in the eye of another storm when she admitted that she authorized the disposal of the relief items after it was found “unfit for human consumption,” by the municipal health officer, Dr. Ofelia Soliva.

Last week, Social Welfare Secretary Dinky Soliman revealed that Petilla might have had a role in the relief items ending up in the dump.

Petilla accused the Romualdez clan, her family’s political rivals, of sowing intrigue and confusion in a time of disaster. “There is never a right thing that I could do. They are always attacking me. I thought we all learned our lessons from Yolanda,” she said.

The Inquirer tried to contact Tacloban City Mayor Alfred Romualdez on Thursday for comment, but the calls were never returned.

Another UN official said the mayor could be guilty of negligence for allowing the relief items to spoil in her care.

“What is obvious is that there was a failure of custody somewhere,” the official of the Rome-based WFP said.

“Our job is to ensure that we use adequately the limited resources that we have to ensure that assistance is provided to the most vulnerable, with the right quantity at the earliest possible time,” he said.

The official said the sacks of rice thrown at the San Jose dump could have been part of the WFP inventory, pointing out that his agency bought all the local rice stocks of the Department of Social Welfare and Development on Nov. 9, a day after Yolanda struck, to “ensure an early mega-response to a mega-disaster.”

“People are starving and they are throwing, wasting resources,” said Joselita Mutia-Poticano, spokeswoman of the COA regional office in Candahug village here. The state audit agency has been tasked with auditing donated relief items.

But residents of Barangay (village) San Jose said they saw the municipal truck dumping rotten relief items at least three times since Nov. 8. These were done early morning when they were still asleep, they said.

“Most of the time, I am here at the garbage site, and I can assure you, the truck had been dumping relief items here,” said Marlo Nacario, a 19-year-old scavenger.

Nacario even showed to the Inquirer half a sack of biscuits that he recovered from the five-hectare dump. “It’s not rotten. I eat it all the time,” he said.

(Editor’s Note: The writer’s father is a distant relative of the husband of Mayor Petilla.)