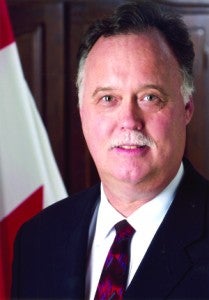 Canadian Ambassador to the Philippines Neil Reeder said on Wednesday that the ICP, chaired by an expert from the Royal Canadian Mounted Police, has been wrapping up its report following public consultations in Mindanao in 2013.

“We had an expert from the Royal Canadian Mountain police who came, and spent several months here. I think their report will be issued very soon, I think in the next couple of weeks, on the proposed policing structure of the Bangsamoro,” Reeder said.

“That would include reference to all the consultations that they’ve done, as well as drawing upon experiences of other countries including Canada,” said the diplomat in an interview on Wednesday.

The commission was tasked to “recommend appropriate policing within the Bangsamoro, which is civilian in character and responsible both to the Central Government and the Bangsamoro Government, and to the communities it serves.”

Reeder said the Bangsamoro policing system might adopt aspects of the Canadian structure, a dual system where both the national and regional police forces would cover certain provinces.

“We’ve been very closely involved in the policing dimension of the agreement, drawing upon the experience of Canada, which have national and provincial layers [of policing],” Reeder said.

He said Canadian provinces that “are not as wealthy” as others usually preferred to use the national police force.

“Each province can use the Royal Canadian Mounted Police as a police force, or they can fund and create their own regional police force. So we have kind of a dual system in Canada that may have applications in the Bangsamoro,” he added.

He welcomed the announcement on the scheduled signing of the the comprehensive peace agreement on Mar. 27, citing the importance of political will in implementing the agreement.

“…I think all countries are very pleased with how this has evolved so far. Implementation of the agreement will be key, political will of the government will be key both in the Congress but also in the region, and we’re hopeful that this will move forward. And in the new Bangsamoro, there will be more opportunities for investment and development cooperation,” the envoy said.

He said peace could finally lead to the development of Mindanao’s rich resources, particularly in agriculture, minerals and even tourism.

“I think the international community will see this as an opportunity for investment [and] for development, and to assist the region that really has been behind in terms of all the (development) indicators in the country for many years,” said Reeder.

“After 40 years of conflict, we want to see peace, stability. We want to see [not only] the approval of the basic law, but also, you know, opportunities for the international community to assist,” he said.