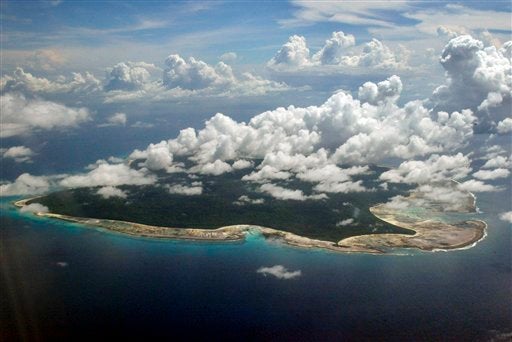 In this Nov. 14, 2005 file photo, clouds hang over the North Sentinel Island, in India’s southeastern Andaman and Nicobar Islands. India used heat sensors on flights over hundreds of uninhabited Andaman Sea islands Friday, March 14, 2014, and will expand its search for the missing Malaysia Airlines jet farther west into the Bay of Bengal, officials said. The Indian-controlled archipelago that stretches south of Myanmar contains 572 islands covering an area of 720-by-52 kilometers. Only 37 are inhabited, with the rest covered in dense forests. AP

The latest evidence suggests the plane didn’t experience a catastrophic incident over the South China Sea as was initially suspected. Some experts theorize that one of the pilots, or someone else with flying experience, hijacked the plane or committed suicide by plunging the jet into the sea.

Adding to the speculation that someone was flying the jet, The New York Times on Friday quoted sources familiar with the investigation as saying that the plane experienced significant changes in altitude after it lost contact with ground control, and altered its course more than once.

A U.S. official told The Associated Press earlier that investigators are examining the possibility of “human intervention” in the plane’s disappearance, adding it may have been “an act of piracy.” The official, who wasn’t authorized to talk to the media and spoke on condition of anonymity, said it was possible the plane may have landed somewhere. The official later said there was no solid information on who might have been involved.

While other theories are still being examined, the official said key evidence suggesting human intervention is that contact with the Boeing 777’s transponder stopped about a dozen minutes before a messaging system on the jet quit. Such a gap would be unlikely in the case of an in-flight catastrophe.

A Malaysian official, who declined to be identified because he is not authorized to brief the media, said only a skilled aviator could navigate the plane the way it was flown after its last confirmed location over the South China Sea. The official said it had been established with a “more than 50 percent” degree of certainty that military radar had picked up the missing plane after it dropped off civilian radar.

Malaysia’s acting transport minister, Hishammuddin Hussein, said the country had yet to determine what happened to the plane after it ceased communicating with ground control about 40 minutes into the flight to Beijing on March 8 with 239 people aboard.

He said investigators were still trying to establish that military radar records of a blip moving west across the Malay Peninsula into the Strait of Malacca showed Flight MH370.

“I will be the most happiest person if we can actually confirm that it is the MH370, then we can move all (search) assets from the South China Sea to the Strait of Malacca,” he told reporters. Until then, he said, the international search effort would continue expanding east and west from the plane’s last confirmed location.

Though some investigators are now convinced that “human intervention” caused the disappearance, U.S. officials told the White House at a briefing Friday that they have “run all the traps” and come up with no good information on who might been involved, according to an official familiar with the meeting. The meeting was attended by State and Defense Department officials, the CIA, the Federal Aviation Administration and the National Transportation Safety Board, among others.

“I don’t think there is any consensus on a theory,” the official said. “They’re not hearing anything in their surveillance that would indicate that this is part of a plot.”

Another U.S. official, who also spoke on condition of anonymity, said investigators looking for the plane have run out of clues except for a type of satellite data that has never been used before to find a missing plane, and is very inexact. 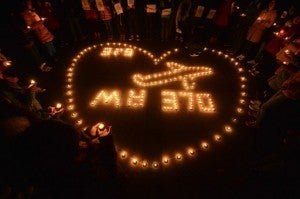 The data consists of attempts by an Inmarsat satellite to identify a broad area where the plane might be in case a messaging system aboard the plane should need to connect with the satellite, said the official. The official compared the location attempts, called a “handshake,” to someone driving around with their cellphone not in use. As the phone from passes from the range of one cellphone tower to another, the towers note that the phone is in range in case messages need to be sent.

In the case of the Malaysian plane, there were successful attempts by the satellite to roughly locate the Boeing 777 about once an hour over four to five hours, the official said. “This is all brand new to us,” the official said. “We’ve never had to use satellite handshaking as the best possible source of information.”

The handshake does not transmit any data on the plane’s altitude, airspeed or other information that might help in locating it, the official said. Instead, searchers are trying to use the handshakes to triangulate the general area of where the plane last was known to have been at the last satellite check, the official said.

“It is telling us the airplane was continuing to operate,” the official said, plus enough information on location so that the satellite will know how many degrees to turn to adjust its antenna to pick up any messages from the plane.

The official confirmed prior reports that following the loss of contact with the plane’s transponder, the plane turned west. A transponder emits signals that are picked up by radar providing a unique identifier for each plane along with altitude. Malaysian military radar continued to pick up the plane as a whole “paintskin” — a radar blip that has no unique identifier — until it traveled beyond the reach of radar, which is about 320 kilometers (200 miles) offshore, the official said.

The New York Times, quoting American officials and others familiar with the investigation, said radar signals recorded by the Malaysian military appear to show the airliner climbing to 45,000 feet (about 13,700 meters), higher than a Boeing 777’s approved limit, soon after it disappeared from civilian radar, and making a sharp turn to the west. The radar track then shows the plane descending unevenly to an altitude of 23,000 feet (7,000 meters), below normal cruising levels, before rising again and flying northwest over the Strait of Malacca toward the Indian Ocean, the Times reported.

Scores of aircraft and ships from 12 countries are involved in the search, which reaches into the eastern stretches of the South China Sea and on the western side of the Malay Peninsula, northwest into the Andaman Sea and the Indian Ocean.

India said it was using heat sensors on flights over hundreds of Andaman Sea islands Friday and would expand the search for the missing jet farther west into the Bay of Bengal, more than 1,600 kilometers (about 1,000 miles) to the west of the plane’s last known position.

A team of five U.S. officials with air traffic control and radar expertise — three from the U.S. National Transportation Safety Board and two from the Federal Aviation Administration — has been in Kuala Lumpur since Monday to assist with the investigation.

White House spokesman Jay Carney sidestepped questions Friday about the possibility of human intervention in the plane disappearance, saying only that U.S. officials were assisting in the investigation.

Malaysia has faced accusations it isn’t sharing all its information or suspicions about the plane’s final movements. It insists it is being open, and says it would be irresponsible to narrow the focus of the search until there is undeniable evidence of the plane’s flight path.

At this point, there is no evidence of any wrongdoing on the part of the two pilots, though Malaysian police have said they are looking at their psychological background, their family life and connections.

Zaharie Ahmad Shah, 53, and Fariq Abdul Hamid, 27, have both been described as respectable, community-minded men.

Mike Glynn, a committee member of the Australian and International Pilots Association, said he considers pilot suicide to be the most likely explanation for the disappearance, as was suspected in a SilkAir crash during a flight from Singapore to Jakarta in 1997 and an EgyptAir flight in 1999.

“A pilot rather than a hijacker is more likely to be able to switch off the communications equipment,” Glynn said. “The last thing that I, as a pilot, want is suspicion to fall on the crew, but it’s happened twice before.”

Timeline: the hunt for flight MH370