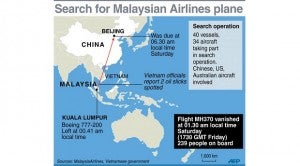 KUALA LUMPUR, Malaysia—Investigators are increasingly certain the missing Malaysian Airlines jet turned back across the country after its last radio contact with air traffic controllers, and that someone with aviation skills was responsible for the change in course, a Malaysian government official said Friday.

A U.S. official said in Washington that investigators are examining the possibility of “human intervention” in the plane’s disappearance, adding it may have been “an act of piracy.” The official, who wasn’t authorized to talk to the media and spoke on condition of anonymity, said it also was possible the plane may have landed somewhere.

While other theories are still being examined, the official said key evidence for the human intervention is that contact with the Boeing 777’s transponder stopped about a dozen minutes before a messaging system on the jet quit.

The Malaysian official, who also declined to be identified because he is not authorized to brief the media, said only a skilled person could navigate the plane the way it was flown after its last confirmed location over the South China Sea.

Earlier Friday, acting Transport Minister Hishammuddin Hussein said the country had yet to determine what happened to the plane after it dropped off civilian radar and ceased communicating with the ground around 40 minutes into the flight to Beijing on March 8.

He said investigators were still trying to establish with certainty that military radar records of a blip moving west across the Malay Peninsula into the Strait of Malacca showed Flight MH370.

“I will be the most happiest person if we can actually confirm that it is the MH370, then we can move all (search) assets from the South China Sea to the Strait of Malacca,” he told reporters. Until then, he said, the international search effort would continue expanding east and west from the plane’s last confirmed location.

The Malaysian official said it had now been established with a “more than 50 percent” degree of certainty that military radar had picked up the missing plane.

On Thursday, a U.S. official said the plane remained airborne after losing contact with air traffic control, sending a signal to establish contact with a satellite. The Malaysian official confirmed this, referring to the process by its technical term of a “handshake.”

Boeing offers a satellite service that can receive a stream of data on how an aircraft is functioning in flight and relay the information to the plane’s home base. Malaysia Airlines didn’t subscribe to that service, but the plane still had the capability to connect with the satellite and was automatically sending signals, or pings, said the U.S. official, who spoke on condition of anonymity because he wasn’t authorized to discuss the situation by name.

Hishammuddin said the government would only release information about the signals when they were verified.

“I hope within a couple of days to have something conclusive,” he told a news conference.

Malaysia has faced accusations it isn’t sharing all its information or suspicions about the plane’s final movements. It insists it is being open, and says it would be irresponsible to narrow the focus of the search until there is undeniable evidence of the plane’s flight path.

No theory has been ruled out in one of modern aviation’s most puzzling mysteries.

But it now appears increasingly certain the plane didn’t experience a catastrophic incident over the South China Sea as was initially seen as the most likely scenario. Some experts believe it is possible that one of the pilots, or someone with flying experience, hijacked the plane for some later purpose or committed suicide by plunging the aircraft into the sea.

Mike Glynn, a committee member of the Australian and International Pilots Association, said he considers pilot suicide to be the most likely explanation for the disappearance, as was suspected in a SilkAir crash during a flight from Singapore to Jakarta in 1997 and an EgyptAir flight in 1999.

“A pilot rather than a hijacker is more likely to be able to switch off the communications equipment,” Glynn said. “The last thing that I, as a pilot, want is suspicion to fall on the crew, but it’s happened twice before.”

Glynn said a pilot may have sought to fly the plane into the Indian Ocean to reduce the chances of recovering data recorders, and to conceal the cause of the disaster.

Scores of aircraft and ships from 12 countries are involved in the search, which reaches into the eastern stretches of the South China Sea and on the western side of the Malay Peninsula, northwest into the Andaman Sea and the India Ocean.

India said it was using heat sensors on flights over hundreds of uninhabited Andaman Sea islands Friday and would expand the search for the missing jet farther west into the Bay of Bengal, more than 1,600 kilometers (100 miles) to the west of the plane’s last known position. Spokesman Col. Harmit Singh of India’s Tri-Services Command said it began land searches after sweeping seas to the north, east and south of the Andaman and Nicobar islands.

A team of five U.S. officials with air traffic control and radar expertise — three from the U.S. National Transportation Safety Board and two from the Federal Aviation Administration — has been in Kuala Lumpur since Monday to assist with the investigation.

Timeline: the hunt for flight MH370

Witness says he may have seen ‘burning’ Malaysian Airlines plane