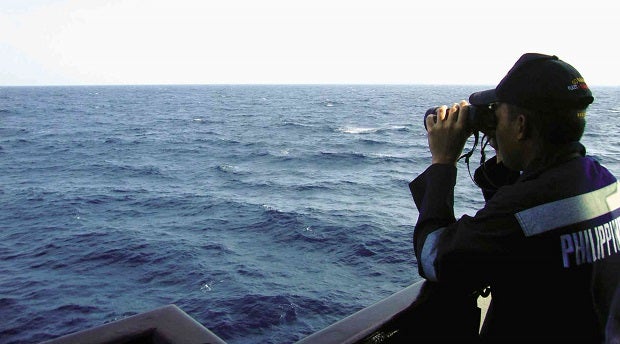 DESPERATELY SEEKING MH370 A crew of the Philippine Navy’s Patrol Ship 36 scours the West Philippine Sea for any trace of Malaysia Airlines Flight MH370, which has been missing for a week. The crew is part of the search and rescue team of the Armed Forces of the Philippines, which has joined other nations in the search for the missing plane. PHOTO FROM PS-36 PHILIPPINE NAVY

Malaysia Airlines Flight MH370 is the latest example of a very rare event in aviation: A plane that vanishes.

With radar, radio traffic and other technology, planes that crash are usually found quickly.

But sometimes searches can take days or weeks if the plane disappears over open ocean or remote and rugged land areas.

Since the dawn of the jet age in 1958, here are some other notable disappearances (not all were jets):

Air France Flight 447: After the 2009 crash of the Airbus A330 jet, debris was found within a few days but it took two years to find the main wreckage on the floor of the Atlantic Ocean. The jet had flown into a fierce storm over the Atlantic after leaving Rio de Janeiro for Paris. All 228 people on board died.

Adam Air: A Boeing 737 operated by the Indonesian airline and carrying 102 people vanished on Jan. 1, 2007. Parts of the tail and other debris were found several days later, but it would take nearly nine months for the flight-data and cockpit recorders to be recovered. The fuselage is still on the ocean floor.

Merpati Nusantara Airlines: In 1995, a flight operated by the Indonesian airline disappeared over open water while flying between islands in the archipelago nation. The De Havilland Twin Otter 300 with 14 crew and passengers was never found.

Faucett Airlines: In 1990, a Miami-bound Boeing 727 owned by the Peruvian airline crashed into the North Atlantic after running out of fuel. There were 18 airline employees and relatives on board. The wreckage was never recovered.

Uruguay Air Force: In 1972, a Fairchild FH-227 turboprop carrying a rugby team and others crashed in the Andes mountains. More than a dozen occupants died. After waiting to be rescued, some survivors hiked out and found help, and other survivors were airlifted to safety. Before being found, they resorted to cannibalism. The crash became the subject of books, documentaries and a feature film.

Flying Tiger Line: In 1962, a Lockheed L-1049H Super Constellation propeller plane chartered by the US military failed to arrive in the Philippines en route to Vietnam. It was carrying 107 passengers and crew. Dozens of planes and several ships searched the western Pacific for the wreckage, but it was never found. AP

Timeline: The hunt for flight MH370

Read Next
Missing plane flew back over Malaysia
EDITORS' PICK
PH resumes talks with China on Chinese-funded transport projects
A laptop that maximizes your WiFi so you can maximize your productivity
Why Tagle is a leading papal contender
PH may import sugar around October if supply runs out
House energy committee chair Arroyo bats for cheap electricity
Powered by style, innovation and passion
MOST READ
U.S. actor Anne Heche is taken off life support 9 days after car crash and dies
Imee Marcos bares illegal importation of white onions
John Arcilla cries foul over death threats for his ‘Ang Probinsyano’ role: ‘Serye lang, walang personalan’
PVL: Celine Domingo gets big surprise as Creamline’s Finals MVP
Don't miss out on the latest news and information.