Talks on increased US presence in PH move forward 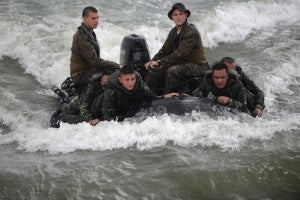 MANILA, Philippines— The Philippines and the United States appear to be on the homestretch of negotiations for an agreement that would allow a larger presence of American military forces in the country, which is widely viewed as a deterrent to China’s aggressive assertion of territorial claims in the South China Sea, including a part that the Manila government refers to as the West Philippine Sea.

At a press conference Friday,  Undersecretary Pio Lorenzo Batino, a member of the Philippine panel, said that the US had accepted the Philippine draft of the proposed Agreement on Enhanced Defense Cooperation.

It is now “both panel’s working draft,” Batino said.

Batino said the Philippine working draft “more comprehensively articulated the Philippines’ positions, notably its consistency with the Philippine Constitution and relevant laws, as well as mindfulness of the country’s historical experiences.”

Issues that dogged the previous rounds of talks have been “significantly addressed,” Batino said.

He said there would be “joint use” of US facilities that would be in the Philippine military bases.

Panel member J. Eduardo Malaya said that the Philippines maintained  its position that the agreement’s term should be less than 20 years.