• Owner helps elderly and nonprofits in the area 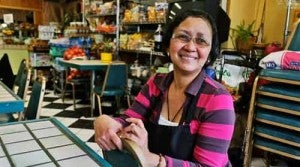 SAN FRANCISCO, California — Someone who doesn’t live or work in the area around 6th and Mission might walk past the Mint Mall and miss the tiny JT Restaurant. But around the neighborhood there are many, from elderly residents to construction workers to Filipino and Latino families, who know the business not only for its home-style chicken and pork adobo, but also for its vital role as a community space.

At the center of it all is the owner and chef, Tess Diaz-Guzman, who is called “Mama Tess” by those who know her.

“I’m proud because everybody calls me [that],” she says, laughing. “I have a lot of nephews and nieces, but [many are] American.”

Diaz-Guzman, 55, owns JT Restaurant in the South of Market neighborhood in San Francisco’s central city area, with her husband Juan, whom she married in 2010. Formerly a butcher and originally from the province of Laguna in the Philippines, she came to San Francisco 13 years ago, shortly after her first husband passed away.

Her brother already lived in San Francisco and had started the Filipino restaurant in the 1990s. Diaz-Guzman and Juan took charge of it a few years ago, renaming it JT Restaurant (the initials for Juan and Tess).

In SoMA, residents who are over age 65 and living alone make up over 10 percent of the population, and more than a third of them are living below the federal poverty line. The city’s rising rents are squeezing nonprofit social service providers and small businesses that often times serve as a “safety net” for low-income seniors and families.

James Chionsini, an organizing director with the nearby advocacy organization Senior and Disability Action, says that small businesses like JT Restaurant are particularly important for “seniors who are living alone. If you live in a small room, you need a community place.”

“Places like Tess’s are an access point,” he says. “They provide the community with ways to survive.” Many in the community affectionately call her the Mayor of SoMA, he said.

The space is used for gatherings. For instance, the West Bay Pilipino Multi-Service Center nearby has brought seniors there to sing karaoke, Diaz-Guzman says. She meets elders when she caters for community centers like West Bay, as well as Centro Latino in the Mission, and organizations like Chionsini’s have used her space for receptions.

She says that many in the surrounding Filipino community tend to cook at home rather than eat out because of the expense, but elderly people in the neighborhood come to the restaurant just to see her.

“If they have a problem they can talk to me,” she says. She knows a number of Filipino and Latino seniors who are still working, as caregivers for example. One neighbor who is 87 and living in senior housing on Ellis Street called her recently when she had a medical emergency and needed help getting to St. Francis Hospital.

Diaz-Guzman has also aided local organizations like the South of Market Community Action Network (SOMCAN) distribute backpacks and shoes to children in the building.

“[The restaurant] is a place where people congregate and she knows folks,” says Angelica Cabande, the director of SOMCAN. She adds that it is “a central place, and it’s vital to the community.”

Tenant advocates leave flyers in the restaurant about meetings and rallies. Diaz-Guzman has had seniors come there asking about housing in the neighborhood, and organizations like the Bill Sorro Housing Program leave literature there as well.

Diaz-Guzman noted that business has slowed with changes in the area over the last 13 years. Her lunch business, in particular, has suffered. One major change she’s seen is the influx of gourmet food trucks in the neighborhood. She used to get more customers who worked in the area, from nearby places like the San Francisco Chronicle, which had heavy staff cuts in recent years, and the Federal Building.

As technology and other new companies have moved into the area, Diaz-Guzman says, “They go to the food trucks, or they don’t need to go out because they have a restaurant in their building.” Within the last year or so she’s been able to recover some of her lunch business because of an uptick in construction work in the neighborhood.

The loss of income means there’s not as much to go around; she sends money home to her four children, ages 17 to 33, who live in Manila. She has not been able to see them since she came to this country.

Last year she had saved enough money to hire a lawyer so that her two youngest could apply to join her here, where they could and finish their studies.

Working all the time helps keep her mind off how much she misses her children. “It’s hard when you have kids. They’re a part of you. That’s why I want to keep busy,” Diaz-Guzman says.

Dreams of growing her business

The restaurant’s dark green chairs and ceramic tile-topped tables are showing their age. Photos from when she won 3rd place for the parol lanterns she made for the Bayanihan Community Center’s annual Christmas festivities are in a frame behind the counter.

“Sometimes I have a dream that I want to grow,” she says. But modernizing the restaurant would take money.

In the past, she’s tried taking classes at City College to learn food presentation skills, but she often had to be late or miss class altogether because of her catering responsibilities. Teachers from the Renaissance Entrepreneurship Center around the corner eat at the restaurant and have asked her to come take classes, she says, but the evening classes begin during her business hours, and she can’t afford to lose any money.

“I’m happy though, even when I can’t pay the rent,” she says. She gets to the restaurant at 4 a.m. and often doesn’t leave until 11 p.m., and she cleans houses if she’s not getting enough business.

“People say, ‘You do everything.’ That’s life.”

Anna Challet wrote this article as part of NAM’s Special Report, “Old and Poor in Tech City,” in collaboration with Central City Extra, focusing on the effects of the tech boom on low-income elders in San Francisco’s inner city. To see coverage from this Special Report, click here. This special report is part of NAM’s in-depth coverage of issues affecting seniors, funded by The Atlantic Philanthropies.