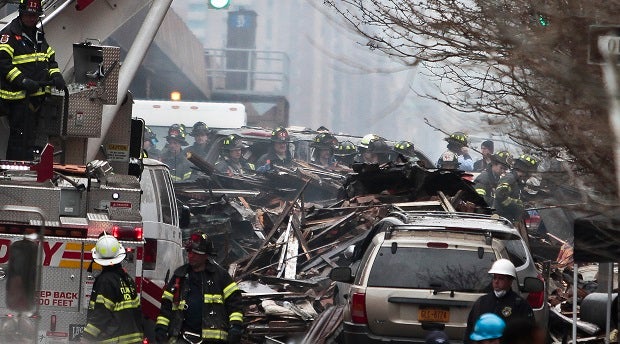 Firefighters continue to investigate and remove debris from an explosion in the East Harlem neighborhood, Wednesday, March 12, 2014 in New York. A gas leak triggered an explosion that shattered windows a block away, rained debris onto elevated commuter railroad tracks close by, cast a plume of smoke over the skyline and sent people running into the streets. AP/Bebeto Matthews

MANILA, Philippines — The Philippine Consulate General in New York has been making the rounds of hospitals in East Harlem to check if there were Filipinos injured or displaced by the building collapse in the predominantly Hispanic neighborhood, the Department of Foreign Affairs (DFA) said on Thursday.

This came, even as a Filipino community volunteer already relayed to the Consulate that “there have been no reported Filipino fatalities or [any Filipino] injured so far,” said the DFA spokesperson, Assistant Secretary Raul Hernandez.

“Our Consulate General in New York is checking with nearby hospitals for any Filipino casualty resulting from the explosion and collapse of two residential buildings on Park Avenue on 116th East Harlem, NYC on March 12,” Hernandez said in a text message on Thursday.

At least four people were killed and more than 60 injured when a gas explosion leveled two buildings in East Harlem in northern Manhattan on Wednesday.

Citing information from the Consulate General, the Philippine Embassy in Washington D.C. said on its Twitter account (@philippinesusa) that some 652 Filipinos were known to be residing in the area, just “a few blocks away” from the St. Lucy Catholic Church headed by Filipino priest, Fr. Oscar Aquino.

The village is home to residents of Hispanic descent, including “Puerto Ricans, Dominicans, El Salvadorans and Mexicans who will also have Filipino-sounding names,” according to the Embassy.