• Up to a thousand Filipinos come to three-day outreach 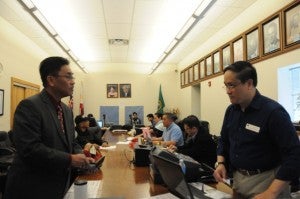 The Consulate-on-Wheels in action. CONTRIBUTED PHOTO

SEATTLE, Washington — A seven-person team from the Philippine Consulate General in San Francisco traveled north to Seattle to conduct the first of four scheduled outreaches to the city in 2014.

With nearly 16,000 Filipinos in Seattle alone (Source: http://www.seattle.gov/oir/datasheet/demographics.htm) , the city has one of the largest Filipino communities in the areas under the Consulate’s jurisdiction.

Acting Head of Post, Deputy Consul General Jaime Ramon Ascalon, expressed his appreciation for the continued support and cooperation of the Filipino Community of Seattle (FCS), which has hosted these outreaches for over ten years.

“The Consulate-on-Wheels/Wings is a regular program of the Philippine Consulate General in San Francisco, in partnership with the local communities in the areas under our jurisdiction,” Ascalon explained. “Since we serve such a large area, our community partners have proved invaluable in making our services more accessible to our clients.”

Ascalon added: “We know that in some cases, our kababayans may still need to travel to the outreach venues, so to make it easier for them to make the necessary arrangements, we publish our schedule of confirmed consular outreaches for the year on our website. Most of our outreaches are held on weekends, to make them even more accessible to our working kababayans.”

Due to the large number of Filipinos working and living in Washington state and surrounding areas, the consulate holds at least seven outreaches there a year – four in Seattle, three in Tacoma. It also recently announced the opening of a new outreach to Wapato, Washington, which will be held March 23 to 24 and is being hosted by the Filipino-American Community of the Yakima Valley.

For more information on upcoming Consulate-on-Wheels outreaches, or to search for a COW coming to your area, visit http://www.philippinessanfrancisco.org/philippines-sf/consular-outreach-sf/ or follow the Consulate’s Facebook page on http://www.facebook.com/PCGSF.