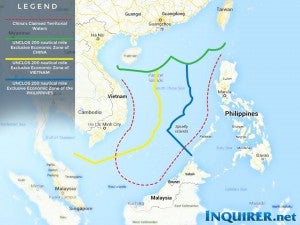 MANILA, Philippines — The Philippines is illegally occupying Ayungin Shoal and the protest filed against China for the recent expulsion incident of two civilian ships are “unfounded,” China’s foreign ministry said.

“Their argument, which distorts the fact and confuses right and wrong, lays bare the Philippines’ attempt to illegally occupy China’s Ren’ai Reef and stir up troubles in the South China Sea,” he said.

Last March 9, two civilian vessels contracted by the Philippine Navy to conduct troop rotation and resupply operations on Ayungin Shoal were followed, blocked, and then turned away by Chinese Coast Guard (CCG) vessels.

A small unit of marines is stationed on a World War II era ship, the BRP Sierra Madre, that was grounded back in 1999 on Ayungin Shoal, also known as Second Thomas Shoal internationally and Ren’ai Reef to China, to mark the Philippines claim.

Department of Foreign Affairs (DFA) spokesman Raul Hernandez said in a previous press conference that this blockade by CCG is the first time in 15 years that they interfered with the operations of the Philippine Navy.

“China’s actions constitute a clear and urgent threat to the rights and interests of the Philippines under the 1982 United Nations Convention on the Law of the Sea (UNCLOS),” according to Hernandez.

A diplomatic protest was submitted to the charge d’affaires of the Chinese Embassy in the Philippines following the incident but China immediately rejected the complaint.

China claimed that the Filipino ships were carrying construction materials and were going to build structures on the shoal.

“The Chinese Foreign Ministry has made solemn representations to the leading official of the Philippine Embassy in China about the Philippines’ attempt to carry out construction work on the Ren’ai Reef,” Gang said.

“China urges the Philippines to stop all provocative actions, make good on its commitment, tow away the ship grounded on the Ren’ai Reef,” he said.

Ayungin Shoal is 105 nautical miles from the coast of Palawan, putting it within the 200-nautical mile exclusive economic zone within which a country has exclusive rights to the maritime resources.

The expulsion of Filipinos from Ayungin marked the second instance that the CCG drove away Filipinos from maritime features within the Philippines waters.

The Philippines’ protest against China for using water cannons against Filipino fishermen was likewise rejected by the Chinese Embassy.

China cites that it has indisputable sovereignty over nearly 90 percent of entire South China Sea as part of its nine-dash line territorial claim.

The Philippines has filed an arbitration case before the International Tribunal on the Law of the Sea (ITLOS) asking that China’s claim be declared illegal.