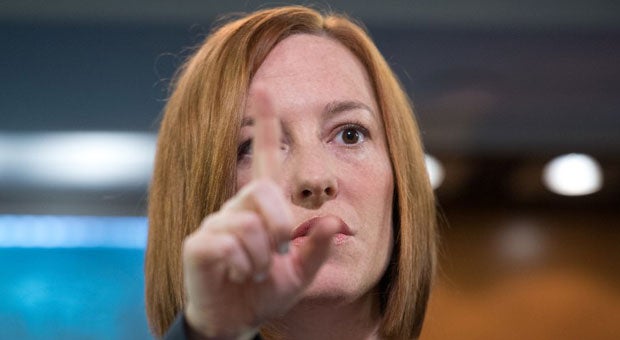 US State Department spokeswoman Jen Psaki speaks at the daily briefing at the State Department in Washington, D. C., on March 10, 2014. Washington on Wednesday, March 12, accused China of raising tensions by blocking two Philippine vessels as it urged freedom of navigation in the tense South China Sea (West Philippine Sea). “This is a provocative move that raises tensions…,” Psaki said. AFP PHOTO/NICHOLAS KAMM

The United States, a treaty-bound ally of Manila, said it was “troubled” by Sunday’s incident in which China prevented movement of two ships contracted by the Philippine Navy to deliver supplies and troops to the disputed Second Thomas Shoal.

“This is a provocative move that raises tensions. Pending resolution of competing claims in the South China Sea, there should be no interference with the efforts of claimants to maintain the status quo,” State Department spokeswoman Jen Psaki said.

The Philippines on Tuesday summoned China’s charge d’affaires, accusing Beijing of a “clear and urgent threat” to Manila’s interests. Beijing countered that the ships “infringed China’s territorial sovereignty” and violated a 2002 declaration of conduct in the South China Sea.

The United States rejected China’s stance, saying that countries had the right to “regular resupply and rotation of personnel” to locations before the 2002 declaration.

The Second Thomas Shoal, which sits around 200 kilometers (125 miles) from the western Philippine island of Palawan, is claimed by the Philippines, China and Taiwan. Beijing calls it Ren’ai Reef.

Malaysia, Brunei and Vietnam claim other parts of the Spratly islands, which lie near vital sea lanes and rich fishing grounds and are also believe to sit on vast mineral resources.

The United States, while saying it takes no position on the sovereignty of disputed territories, has been increasingly robust in its criticism of China. Last month, the United States challenged the legal basis for China’s claims over a vast area across the South China Sea, .

The United States has been seeking to prevent China from taking more drastic action in the South China Sea. In November, China declared an Air Defense Identification Zone—requiring planes to report to Beijing—over a vast area in the East China Sea where it has a separate but intense feud over Japanese-administered islands.

US troubled by Ayungin Shoal incident