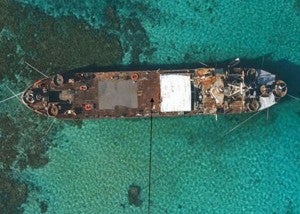 MANILA, Philippines — Two Filipino vessels were expelled from Ayungin Shoal (Second Thomas Shoal) in the Spratly group of islands by the Chinese Coast Guard (CCG) Sunday, according to the state news agency Xinhua.

The Department of Foreign Affairs (DFA) has yet to issue a statement confirming the expulsion incident in Ayungin shoal.

“China has indisputable sovereignty over the Nansha (Spratly) Islands and their adjacent waters including the Ren’ai Reef,” Gang was quoted as saying by China’s state news agency Xinhua.

“The moves infringed China’s sovereignty and violated the spirit of the Declaration on the Conduct of the Parties in the South China Sea,” he said.

Gang accused the Philippines of attempting to conduct construction on the reef, prompting the CCG to expel them.

The Philippines only defense on the shoal is the BRP Sierra Madre, which was intentionally grounded on Ayungin in 1999 to mark the country’s territorial claim.

Several soldiers are stationed on the rusted Sierra Madre. They are constantly surrounded by CCG vessels patrolling the waters around the shoal.