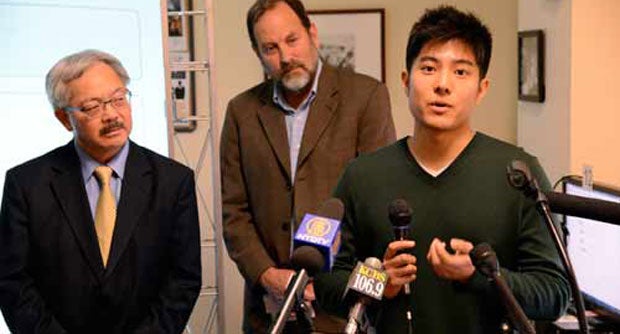 To date, six companies have inked community benefits agreements (CBAs) with the city in order to take advantage of the tax deal. The mid-Market area, the epicenter of the tech boom, encompasses two neighborhoods – Tenderloin and South of Market (SoMa) — with large numbers of poor, elderly residents.

Two mid-Market technology companies enjoying a tax holiday say early in their community benefit agreements (CBAs) that helping neighborhood seniors is a high priority, yet The Extra has been hard-pressed to find much evidence of that.

After stating good intentions, Twitter never mentioned seniors again in its 2014 CBA. None of Twitter’s ballyhooed $388,000 to nonprofits is targeted to the elderly.

One Kings Lane, Zoosk and Spotify don’t even mention the “S” word in their CBAs, though seniors comprise at least a fifth of the neighborhood’s population.

City Administrator Naomi Kelly in January signed off on CBAs with six companies: Twitter, Microsoft, One Kings Lane, Zendesk, Zoosk and Spotify, but has refused to discuss the agreements with the Extra.

In the five CBAs completed last year, however, seniors got some help. Yammer gave computer monitors to Tenderloin Tech Lab, used primarily by homeless and elderly men dwelling in single room occupancy (SRO) hotels. Also, the Curry Senior Center benefited from teams of volunteers from Twitter and Zendesk, and Episcopal Community Services also received volunteer hours from tech companies for some of its services that benefit seniors. Overall, though, the level of support to the elderly was and is shockingly disproportionately low.

Twitter spokesperson Karen Wickre did not respond when asked about Twitter’s aid to seniors, and Twitter acting community liaison Eugene Yi looped a similar question back to Wickre.

Yammer, like Twitter and One Kings Lane, a tenant of the Shorenstein Company at 1355 Market, pledges 15% of a $50,000 grant program — $7,500 — to nonprofit organizations that benefit seniors.

Zendesk’s CBA promises to include Curry Senior Center in its volunteer efforts. Community liaison Tiffany Apczynski notes that, although “our existing CBA does not directly earmark anything for seniors, the folks at Curry and the Tenderloin Tech Lab know we are here to be supportive of the services they provide.”

Tenderloin Tech Lab, operated by St. Anthony’s Foundation, is an obvious nexus for the community and tech workers to collaborate. And they have.

Zendesk and Twitter send volunteers on Fridays to either conduct the classes the lab hosts daily or offer individual tutoring, Trotter said.

Zendesk “catered our holiday party,” Trotter said, and on Feb. 28, Mayor Lee and Supervisor Kim were on hand at the lab as Zendesk, the lab and Gray Area Foundation for the Arts launched www.link-sf.com, a low-income resource database accessible from mobile devices. Twitter hosted a “Women and Tech” event and consulted with the lab on a Twitter feed and social media strategies.

Twitter and Google have visited during their day of service events and the lab also benefits from discounted Microsoft software from the San Francisco-based nonprofit TechSoup, Trotter said, a service that it offers to nonprofits nationwide.

“We did not and do not currently get any support for our computer lab” from the tech firms, Monte Cimino, Curry Senior Center’s director of programs, said. The lab — seven desktop computers, a printer and a scanner — is used throughout the day five days a week and hosts five classes weekly in English, Cantonese, Vietnamese and Lao, covering general computer skills, social media, searches and Skype use.

Curry Executive Director David Knego said the center serves 2,000 clients per year, and 300 every day — 200 for meals, 30-40 at the health clinic, 10 at the counseling program and 20-30 at the computer lab. Curry also provides 13 units of housing for formerly homeless seniors.

“We’re a place to be,” he said, citing the center’s movies, computer lab and case management services. But, apparently not for many of the tax-break tech companies.

Knego singled out Zendesk for its volunteerism. “They’re probably No. 1 in our eyes, everybody knows they’re the big dog, because she (Apczynski) calls you back, she shows up.” He also mentioned Salesforce, a non-CBA company Curry considers “one of our biggest corporate partners” through its volunteerism and financial support.

At Episcopal Community Services, Bruce Beery, director of development, said the organization last fiscal year served 9,628 seniors, including about 200 in supportive housing. Episcopal Community Services operates on a $19 million budget, mostly from federal contracts administered by the city, but generates $1.2 million of that through individual donations and foundation grants with corporate philanthropy accounting for a smaller piece of the pie, Beery said.

“We feel that we enjoy good support from the tech companies — of course, we would like to do better. We have been working hard to develop those relationships,” he said.

Beery cited “liberal volunteerism” from the companies — hundreds of hours.

Zendesk, which Beery described as “a company that’s in the lead among companies that have CBAs,” provides financial support and volunteers.

“They’re very new to this game,” Beery said of the tech companies in general. “They are not great yet at some of these kinds of things. We are working to expose them to our financial support opportunities.”

“To our knowledge we don’t have any money coming in — it’d be nice,” said Sue Corst, director of the S.F. Senior Center, which serves 1,500 elderly per year. “I can’t blame the tech guys; I don’t have the time to follow up,” she said. “We have not yet expected or anticipated anything — not that we wouldn’t appreciate it.

“I know that there’ve been a variety of collaborative efforts to reach out, but we haven’t gotten any direct money or phone calls.”

Teresa Imperial of the Veterans Equity Center also said they are going it alone in terms of receiving any aid from tech newcomers. “We have not received any phone calls,” she said. “None of the tech companies have proactively reached out to us.” Imperial said the center needs help setting up its database.

The plight of the elderly and others in need in the central city is summed up by Jessica Lehman, executive director of Senior and Disability Action.

“Unfortunately, the Tenderloin and South of Market have seen a lot of really scary and negative impacts of changes from the tech industry moving in –- chiefly eviction and displacement, particularly of seniors,” she said.

“Every day, we have seniors and people with disabilities coming in in crisis about housing. We’re also seeing the impact of the housing crisis on people’s health. We’re not currently getting any assistance.

“We could definitely use financial support to keep our programs going,” Lehman said. “What we want is not a handout. We want tech companies to do their part in the community.

“Support is always welcome,” Lehman said, “but we’re hesitant because we want to see the big picture get addressed. The big picture is volunteers or legal assistance are a Band-Aid on the bigger problem. It’s very doable for these companies to get together with the city to build more affordable housing, better job training, implement policies to prevent eviction.”

“We want the city to expect tech companies to pay their taxes and not throw a thousand dollars here or there but to create a cohesive plan with serious funding for housing and jobs.

“There’s been talk of tech workers volunteering. We need the management of tech companies to recognize that community service is not a replacement for affordable housing, fair housing policies and for jobs.

“My co-worker was talking about seeing some Twitter employees cleaning the sidewalk and we were saying that getting rid of trash in the streets does not address the bigger mess of evictions, displacement and the housing crisis that we’re seeing.

“The city says they’re not causing evictions, but they’re part of a housing market where speculators benefit by evicting people.

“Another thing we’re dealing with is not only hearing about seniors and disabled getting evicted, but nonprofits like ourselves being unable to stay in the neighborhood and provide services. There are so many pressures on nonprofits.”

Senior and Disability Action is a reflection of just those kinds of pressures, the product of a mid-2012 joining of forces between Senior Action Network and Planning for Elders when rising rents forced them to flee their offices at 965 Mission St. and move together four blocks away.

Mark Hedin is a reporter with Central City Extra.This is part of a special report by New America Media and Central City Extra, “Old and Poor in Tech City,” focusing on the effects of the tech boom on low-income elders in San Francisco’s central city. It is part of NAM’s in-depth coverage of issues affecting seniors, funded by The Atlantic Philanthropies.To see coverage from this special report, click here.