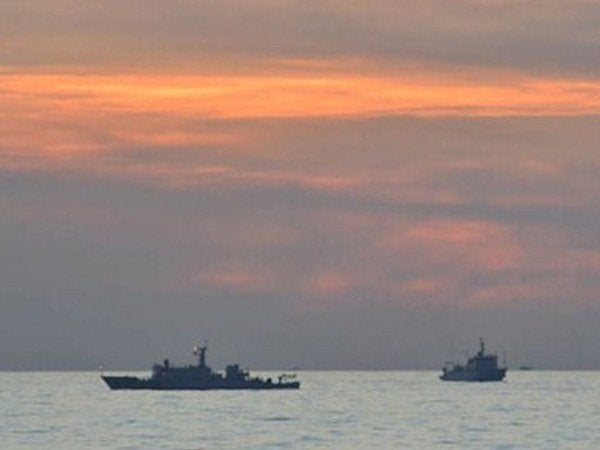 “The Chinese Coast Guard tried to drive away Filipino fishing vessels to the extent of using water cannon,” Bautista told a forum of the Foreign Correspondents Association of the Philippines.

He did not say if anyone was hurt, but added that the fishermen reported the incident to authorities and that China continued to maintain armed Coast Guard and other vessels at Panatag Shoal, 220 km off the Philippine main island of Luzon and 650 km from Hainan Island, the nearest major Chinese landmass.

A senior military official in charge of monitoring the disputed territories in the West Philippine Sea said the Chinese vessels used water cannon only to scare the Filipino fishermen off the shoal and the fishermen were not actually hit by the spray.

The incident appeared to be isolated and no other acts of intimidation have been reported by Filipino fishermen, said the official, who spoke on condition of anonymity because he was not authorized to talk to reporters.

Asked if the Philippines would lodge a protest over the incident, Bautista said Filipino officials would have to investigate before deciding what step to take.

China’s defense ministry spokesperson Hua Chunying did not directly address the Philippine allegation when asked about it.

“I would like to reemphasize that China has indisputable sovereignty over relevant waters and China’s maritime surveillance fleet [is] carrying routine patrols in relevant waters,” Hua told reporters in Beijing.

The incident is considered one of the more aggressive moves of China against Filipino fishermen since declaring new fishing regulations for enforcement by the Hainan municipal government starting Jan. 1.

Under the new rules, foreign fishing vessels must seek permission from Chinese authorities before entering waters administered by the Hainan government.

Those waters make up 90 percent of the 3.5-million-square-kilometer South China Sea, including parts within the exclusive economic  zones of China’s neighbors.

The Philippines, Vietnam, Brunei, Malaysia and Taiwan, which have territorial claims in the South China, do not recognize China’s expansive claim.

Philippine and Chinese Coast Guard vessels faced off at Panatag Shoal for more than two months in 2012.

Manila broke the standoff by calling back its vessels as a storm approached, but Beijing did not recall its ships and instead cordoned off the area and stationed Coast Guard vessels there, effectively seizing it, after the storm.

With nothing to match China’s firepower, the Philippines took the territorial dispute to the United Nations for arbitration in January last year.

Five days before the Jan. 27 incident at Panatag, President Aquino told the Inquirer in an inteview that, with only a little more than two years left in his term, the territorial dispute with China was topmost on his mind, emphasizing that its national security implications were likely to remain beyond his tenure.

Aquino said there had been no reports of untoward incidents in disputed areas in the West Philippine Sea since the declaration of new Chinese fishing rules.

Five days later, Chinese Coast Guard vessels fired water cannon at Filipino fishermen near Panatag to drive them away from the shoal.

Asked how the military responds to such harassment of Filipinos in Philippine waters, Bautista said, “We do not want any confrontation with anybody, in this case the Chinese Coast Guard.”

He said the military, as a matter of policy, preferred “to resolve the issue through peaceful legal means and that is through international arbitration.”

“It is our national policy to renounce war as an instrument of policy. That is the reason for our posture in the West Philippine Sea,” he said.

China has refused to take part in the arbitration at the United Nations, but the case can proceed even in its absence.

The arbitration tribunal, however, has no powers to enforce its decisions, although UN member countries can pressure China to accept a ruling in favor of the Philippines.

Bautista noted that “there are no specific sanctions . . . available to the international arbitration court,” but said “international opinion will weigh down on China and I guess that is very important to any country.”

“The Philippines is a small country and we are up against a big country but as I said, we have to assert our right. It doesn’t mean that if you are big you are right then we will continue to pursue our case in the international arbitration court because it is the right thing to do. I believe in that process and the wisdom of the court and the international community,” Bautista said.

Protector of the nation

Bautista added that the country’s adherence to the peaceful resolution of the territorial dispute with China has not weakened the military’s “resolve to perform our mandate as protectors of the people and the state and of our national territory.”

“We will continue to perform that mandate with whatever we’ve got,” he said.

Bautista said there were still Chinese vessels at Ayungin Shoal (Second Thomas Shoal) in Philippine waters in the Spratly archipelago.

The Philippines has grounded a rusty naval ship on Ayungin Shoal to mark its territory in the disputed Spratlys.

US Ambassador to the Philippines Philip Goldberg told the same forum that China’s expansive claim in the South China Sea, indicated by a nine-dash line on Chinese maps, had no basis in international law.

“There’s no such thing,” Goldberg said.

While saying it does not take sides in territorial disputes, the United States has said it has interests in freedom of navigation in the South China Sea, a strategic waterway where a third of global commerce passes annually.

The United States also supports the Philippine arbitration case in the United Nations and the conclusion of a code of conduct in the South China Sea between China and the 10-member Association of Southeast Asian Nations (Asean).

Goldberg said the code of conduct was “long overdue.”

“The negotiating process should be accelerated,” he said.

“We support efforts of the Philippines to resolve disputes on overlapping claims through diplomacy and recognize international legal processes. A key part of that framework is the inclusion of mechanisms such as hotlines and emergency procedures to prevent incidents in sensitive areas,” Goldberg said.

He stressed that the United States was taking no sides “on regional territorial disputes but we do stand on our principles. We reject unilateral attempts to alter the realities on the ground, air or the sea.”

“Consultation with neighbors and adherence to the code of conduct, respect for freedom of navigation, these should be the bywords of the 21st century,” he added.

Goldberg said the United States supported the Philippines’ program to build a minimum credible defense capability for its armed forces “as it is the right of sovereign nations.”

“The US supports that effort. Nations need to be able to defend their borders and protect their people, not just from traditional aggression and threats of transnational crime, smuggling and international terrorism,” he said.

The US-Philippines Mutual Defense Treaty “has been a cornerstone of stability and security in the region for decades and will continue to be so,” he said. –With reports from AFP and AP
Originally posted at 1:08 pm | Monday, February 24, 2014