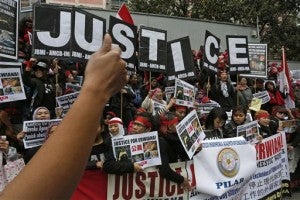 KUALA LUMPUR—A Malaysian couple was sentenced to hang for starving their Indonesian maid to death, a defense lawyer said Friday, in the latest shocking case to spotlight abuse of domestic helpers in the region.

Isti Komariyah weighed just 26 kilograms on her death in Kuala Lumpur in June 2011 from what a court ruled was deliberate starvation, according to Malaysian media reports on the ruling issued Thursday.

“She was 26 and weighed barely 26 kg when she was taken to the University Malaya Medical Centre with bruises and scratch marks on her back, arms and forehead,” The Star newspaper reported.

Fong Kong Meng, 58, and his wife Teoh Ching Yen, 56, consistently withheld food from Isti during the three years she worked for them, the court found.

Isti had weighed 46 kg when she first started working for the couple.

Defense counsel Ramkarpal Singh confirmed the sentence to AFP. He said his clients would appeal against the decision on Monday.

The case is the latest to underline growing concern over the vulnerability of millions of Indonesian, Philippine, Cambodian and other domestic workers to abuse by their employers around Asia and the Middle East.

Rights groups say countless maids work behind closed doors without adequate legal and labor protections, and shocking cases of beatings, maimings and deaths have emerged over the years.

Hong Kong vowed last week to strengthen legal oversight over maid employment after gruesome images surfaced of injuries sustained by 22-year-old Erwiana Sulistyaningsih of Indonesia, who has been left unable to walk.

Thousands of domestic helpers took to the streets of Hong Kong in protest in January demanding justice over the case. Her employer has been arrested and charged with assault.

Saudi Arabia signed a pledge with Indonesia last month to give maids better protection but is still under pressure from activists who want further reforms.

A Cambodian maid was starved to death in 2012 by her Malaysian employers, earning them 24 years in jail. Cambodia had stopped sending maids a year earlier over previous abuses.

Despite a number of cases in relatively affluent Malaysia involving abuse of maids from less-developed Indonesia, domestic workers continue to arrive, drawn by economic necessity.

After Indonesia imposed a two-year moratorium on sending maids in 2009 due to a string of abuse cases, Malaysia has taken some steps to improve maids’ welfare, including giving them at least one day off a week and nearly doubling minimum monthly salaries to 700 ringgit ($210).

However, activists say the new rules are not adequately enforced.

“We want to be serious about human rights abuses, but the death penalty is not a proven deterrent. We cannot leave maids living in isolation with no access to aid when they face problems,” Yap Swee Seng, executive director of Malaysian rights group Suaram, told AFP.

Indonesia estimates 400,000 women work in Malaysia as maids—about half illegally. Indonesian workers account for roughly half of all foreign laborers in Malaysia.