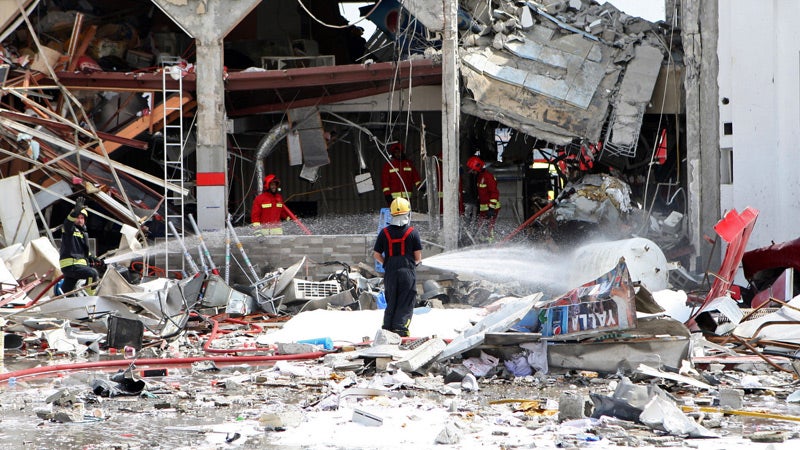 Firemen work at the site of an explosion in Doha, Qatar, Thursday, Feb. 27, 2014. A apparent gas explosion Thursday at a restaurant near a filling station in the Qatari capital killed a dozen people and wounded several more, emergency services officials in the energy-rich Gulf nation said. (AP Photo)

MANILA, Philippines—Two Filipinos were killed on Thursday when a gas tank exploded at a Turkish restaurant in Doha, Qatar, the Department of Foreign Affairs (DFA) said Friday.

“Our Embassy in Qatar confirmed that 12 individuals, including two Filipinos, died in an apparent gas tank explosion in a restaurant in Doha, Thursday,” DFA spokesman Raul Hernandez said in a press conference.
Two other Filipinos suffered head injuries but are in stable condition in a local hospital.

“The Filipino victims are merchandisers at a supermarket inside a mall adjacent to the restaurant. They were in one of the establishments in that vicinity when the explosion happened,” Hernandez said.

“The relatives of the victims have already been informed of the fate of their loved ones,” he said.

Secretary of Foreign Affairs Albert del Rosario has given instructions for the Embassy to give the necessary assistance for the repatriation of the remains, Hernandez said.

“The two who were injured are already in the trauma section of a hospital and the two who were killed are now ready for repatriation,” Carmelita Dimson, administrator of the Overseas Workers Welfare Administration said in Filipino in an interview on Inquirer Radio 990AM adding that their names have yet to be disclosed.

She said the families of the dead OFWs would receive P200,000 in death benefits,   P20,000 in burial benefits, scholarship grants for their children and livelihood assistance for the surviving spouses.

The injured migrant workers, meanwhile, will be compensated depending on the extent of the injury they suffered.

The Al Jazeera news website reported that at least 12 people were killed including two children due to a gas explosion in a restaurant in Doha city, the capital of Qatar.

Qatar head of public security, Major General Saad bin Jassim al-Khalifi, was quoted as saying that the blast was “very big” and caused debris to be blown away as far as 50 to 100 meters away.