‘Books for the Barrios’ shifts to rebuilding schools, training teachers 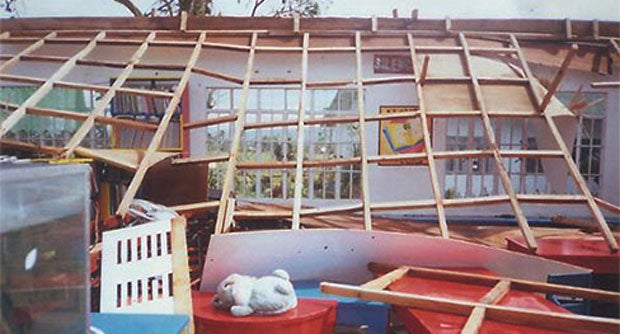 SAN JOSE, California—For over 30 years, Books for the Barrios (BftB) has reached the farthest corners of the Philippines—those that are the hardest to reach and most in need—building much-needed libraries and, often, putting books into the hands of disadvantaged children for the very first time.

Dan and Nancy Harrington are the power couple that spearheaded this enormous undertaking over 30 years ago. Their work is in transition, shifting from collecting and shipping donated books to rebuilding typhoon-damaged schools and teacher training.

The Harringtons lived in the Philippines for six years, traveling to rural areas on the weekends.  In these excursions they would visit beach resorts and barrio schools. They noticed a pattern—“greats kids, but no books.” This observation was the turning point for the Harringtons and the beginning of a long endeavor.

BftB reports that last year approximately 174,000 pounds of materials were shipped overseas and delivered to over 100 schools in dire need of books.  Books for the Barrios is “a project of the heart” that sends 100 percent of its fundraiser proceeds and donations to struggling schools.

“Their passion is contagious and the cause is something I could easily get behind,” said longtime supporter Christina Dunham. Poor children will literally travel over mountains and cross rivers to get to school, she said.

“Books for the Barrios does an amazing job of supplementing what little materials many of these barrio schools have, from pencils to crayons to coloring books. With over 12 million books sent overseas, BftB has had a tremendous impact on the lives of many students in the Philippines. An example of this is Cassidy Elementary in Carigara, Leyte, where many of my own relatives go to school,” Dunham added.

Books for the Barrios collects appropriate books for school children grades K-6.  Unfortunately, many who have the passion to learn are unable to attain it.  The group’s mission is to “spread peace and battle poverty through education.” 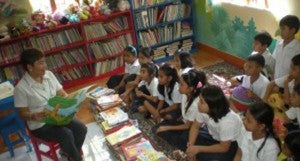 Nancy Harrington has seen concrete results of their work. She said, “The rate of illiteracy has certainly declined in the schools we have reached out to and supported, and from that, many of the schools top the national academic test scores.”

In a letter to the Harringtons, an administrator at the University of the Visayas, Eladio Dioko, whose library is a recipient of BftB books, said, “Your Books for the Barrios program is the best thing to happen in this part of the country insofar as our goal of improving the quality of the teaching-learning process is concerned.  With these beautiful books available we can entice our children to love books and therefore develop their reading habit at an early age.”

With no paid employees, BftB depends on 10,000 volunteers to help the organization flourish.  To date, 14 million books have been donated with an average of 600,000 books a year.  More than 10,000 libraries have been provided for deprived, depressed and underserved public schools.

Pupil-researcher Kim Ronquillo, 11, wrote a letter to the Harringtons. Ronquillo and her teacher made an experiment titled “Efficacy of Fermented Snake Plant Against the Eggs of Golden Apple Snails” and joined a contest at the division level.

“Because of that victory, I went on to compete and win the gold medal in agriculture category,” Ronquillo said.  “Thank you so much Ma’am Nancy; because of the books from the model of excellence we are so blessed and privileged.”

The organization is changing but still going strong. “Books for the Barrios is concentrating on efforts (in 2014) to find sponsors to fund our ongoing humanitarian disaster relief operations throughout the Philippines,” said Dan Harrington.

It will no longer collect books and will be sending its last container shipment of books in August.  Instead, it will be holding fundraisers to raise money for rebuilding libraries that were destroyed by Typhoon Yolanda as well as invest in teacher training.

“The most important aspect of donating to a Third World country is the opportunity to provide a good education especially to young children,” stated Dan Harrington.  “We do so by providing quality books, educational materials, and professional teacher training.”