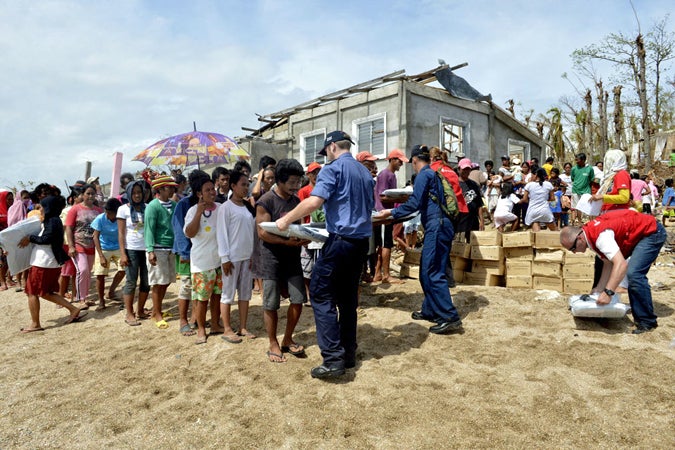 Royal Navy personnel from HMS Daring and medics from Save the Children hand out British-donated aid on Binuluanguan Island. Photo courtesy of the British Embassy in Manila

MANILA, Philippines—Military relief workers from the United Kingdom have expressed their desire to return to the areas devastated by Super Typhoon Yolanda (international name Haiyan), saying the country is a “very rewarding” place to work.

“When the crew of the two ships, HMS Daring and HMS Illustrious, and the Royal Air Force team returned to the UK, they said that the mission to the Philippines was one of the highlights of their career,” British Ambassador to the Philippines Asif Ahmad said in an event Thursday night.

“Because there’s something about the Filipino that makes this a very rewarding place to work, and people said just the smile on the people of the Philippines was all they wanted in return,” he said.

The UK military was among the first to respond to the areas severely hit by Yolanda, deploying more than 1,300 military personnel and relief workers with vital equipment throughout the Visayas.

The UK government and the general public have donated up to P12 billion to international charities such as Oxfam to deliver immediate humanitarian needs and long term rehabilitation.

British military troops withdrew from the Philippines in December paving the way for international relief agencies to start the long road to recovery. But despite their primary role being over, many are sure to come back, Ahmad said.

“Whether it’s in a few years time, they would like to revisit the islands where they helped see how the recovery is going,” Ahmad said.

“We’ve seen this in the past, when servicemen have served in a place like this, they keep connections and privately or through fund raising, they come back again one way or another,” he said.