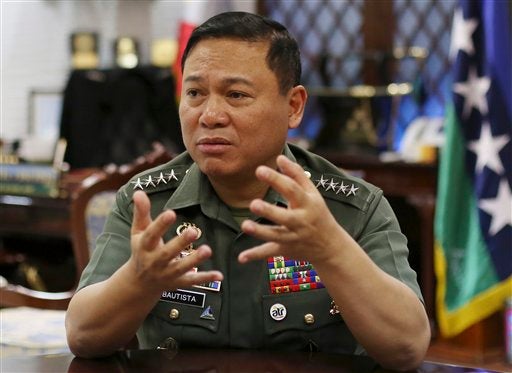 MANILA, Philippines – The  military chief on Thursday vowed to defend the country’s fishermen against any Chinese “terror or intimidation” in the South China Sea, the latest sign of sharpening tensions in what is a potential global flash point.

In an interview with The Associated Press, General Emmanuel Bautista, chief of staff of the Armed  Forces of the Philippines, said Chinese claims to islands just off the Philippine coast are “of course absolute nonsense. Just take a look at the map.”

China claims almost the whole of the vast South China Sea, which is believed to have significant oil and gas deposits. Beijing has been increasingly assertive in pressing its claims in the ocean against its smaller neighbors, sending navy ships into contested waters and harassing fishing fleets of nations with rival claims.

“Our fishermen will continue on fishing, assert their rights on those areas. They should go on with their lives and live their life as fishermen, not to bow down to terror or intimidation,” Bautista said, referring to an incident in which he said a fishing vessel was sprayed by a water cannon on a Chinese boat.

Asked if the Philippine military would defend the fisherman in the event of another incident, he said, “To the best we can, we will support them, especially if there is more aggression and unnecessary use of force.”

China and the Philippines, along with Brunei, Malaysia, Vietnam and Taiwan, have overlapping claims in the South China Sea, with China and Taiwan claiming the largest swathe of the strategic waters. The United States is a military ally of the Philippines and shares many of the concerns of the small countries regarding China, but says it wants a diplomatic solution.

The United States gave the Philippines two coastguard cutters which have been turned into the country’s biggest naval vessels. Bautista said the navy is procuring two new frigates and other vessels to boost its maritime force.

Manila announced last year it has taken its claims to a United Nations-backed tribunal, which will take several years to reach a verdict. China has insisted instead on one-on-one negotiations to resolve the territorial conflicts. Such negotiations, which would give China an advantage because of its sheer size, have been rejected by the Philippines.

Bautista said that decision risked angering China in the short term, but that it was the right course of action.

“They are a big country, we are a small country. What can we do? Bring it to court, solve it through peaceful means,” he said.

The Philippine military is one of the weakest in Asia, and for much of the last 40 years has been fighting internal security threats from Muslim separatists and Communist insurgents. Last month, government negotiators announced they had a reached a peace deal with the largest separatist group, the Moro Islamic Liberation Front.

Bautista expressed hope that the deal could provide a model for other conflicts in the country, allowing it to focus on external defense and disaster relief in a country prone to earthquakes and typhoons.