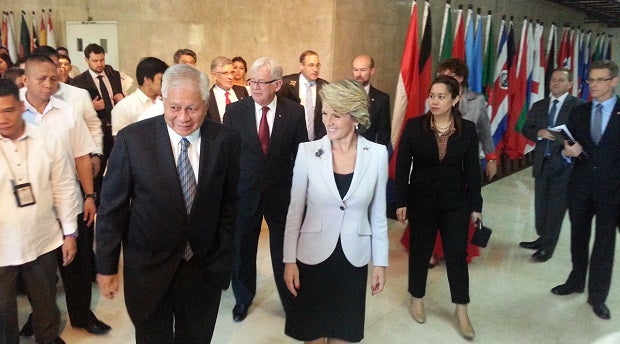 “We agreed to continue advancing our defense and security cooperation including focusing on counter-terrorism with the holding of the fourth round of bilateral counter-terrorism consultations this year,” del Rosario told reporters in a press conference Thursday.

“We also agreed on convening the second strategic dialogue which brings together our foreign affairs and defense officials in discussing and coordinating on issues of mutual and strategic concerns,” he said.

The Philippines’ Status of Visiting Forces Agreement (SOVFA) with Australia was entered into force on September 2012 and del Rosario believes that this agreement will improve the way Philippines addresses maritime security as well as humanitarian assistance and disaster response.

Del Rosario said that the bilateral agreement “facilitated the humanitarian and disaster response operation of the Australian Defense Force in the typhoon affected areas in the central Philippines.”

Department of Trade and Investment Secretary Gregory Domingo was also present in the meeting to discuss trade and economic ties with his Australian counterpart Andrew Robb.