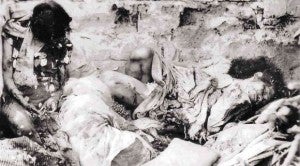 DEAD bodies could not be buried as relatives fled the carnage. Photo courtesy of Albert Montilla

Pitifully few, though, in the Philippines and even fewer elsewhere, know that in Manila, in February 1945, World War II at its agonizing climax brought forth 100,000 burned, bayoneted, bombed, shelled and shrapneled dead in the span of 28 days.  Unborn babies ripped from their mothers’ wombs provided sport: thrown up in the air and caught, impaled on bayonet tips.

With rape on the streets and everywhere else, the Bayview Hotel became Manila’s rape center.  After the dirty deed was done, nipples were sliced off, and bodies bayoneted open from the neck down.

William Manchester in his book “American Caesar,” wrote that “Once Rear Adm. Sanji Iwabuchi had decided to defend Manila, the atrocities began, and the longer the battle raged,  the more the Japanese command structure deteriorated, until the uniforms of Nipponese sailors and marines were saturated with Filipino blood.

“The devastation of Manila was one of the great tragedies of World War II.  Seventy percent of the utilities, 72 percent of the factories, 80 percent of the southern residential district, and 100 percent of the business district were razed…Hospitals were set afire after their patients had been strapped to their beds.  The corpses of males were mutilated, females of all ages were raped before they were slain, and babies’ eyeballs gouged out and smeared on walls like jelly.”

From ‘Pearl’ to rubble

The envy of other Far Eastern cities before the war, lovely Manila, a melting pot of four cultures and the acknowledged Pearl of the Orient, turned completely to rubble and smoldering ash, wrack and ruin in the 28 days it gasped its last.  Its face changed forever, national as well as city administrators since then have barely seen to its proper post-war urban planning and reconstruction, with the exception of a few government buildings rebuilt to their original states. (Zoning laws? What’s that?)

In dramatic foreshadowing, the Irish Columban priests at Malate Church got a taste of what was to come.  An unknown volunteer worker at the Remedios Hospital wrote that on Dec. 22, 1944, “most beloved” Father Patrick Kelly and Father John Lalor, were taken away by enemy soldiers.

On Christmas, Dec. 25, 1944, the priests offered dinner for 200 poor folks.  “We had to put up a brave front with smiles on our faces and lead in our heart.”  The missing priests returned to Malate on Dec. 29 to great rejoicing, but they never talked about what strife they had undergone.

A timeline of bloody events as they unfolded helps to remind us that war is hell, through which Manila agonized.

Feb. 1, 1945: “Roll out the barrel, Santa Clause is coming,” is the note wrapped in goggles dropped by a plane to starving Allied countries’ civilians interned at the University of Santo Tomas (UST).

Feb. 4: Japanese marines commanded by Rear Adm. Sanji Iwabuchi retreat to Intramuros, blowing up all the bridges across the Pasig.

Feb. 9: Ermita and Malate are put to the torch.  Nicanor Reyes’ living room is piled high with furniture and drapes; gasoline is poured over them.  The founder of Far Eastern University and some members of the family burn there after being bayoneted, but young daughter Lourdes who has hidden in a closet, and her wounded mother and aunt, flee to Leveriza to join her grandmother.  Against a wall, the four set up a makeshift shelter with burned GI sheets.  In the shelling, Lourdes’ mother who is shielding her, and her aunt, and grandmother, are killed. 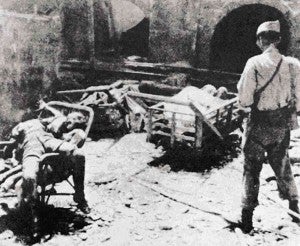 THE BATTLE of Manila left the city in total devastation and killed 100,000 Filipino civilians. Photo courtesy of Albert Montilla

Jesus Cabarrus Jr. has shrapnel embedded in his skull to constantly remind him of the terror-filled days in Ermita.  Ordered by enemy troops to converge at nearby Plaza Ferguson, the men are separated from the women and children, and brought to Manila Hotel (where Jesus Sr. and other men become water boys, and where he saw Walter Loving, the Constabulary Band chief, stabbed to death).

Wives and children are ordered to Bayview Hotel where the only water is out of toilet water tanks, and females are wantonly raped.  Amid screaming when the building begins to burn, the Cabarruses flee, stepping over bloodied bodies dead and dying.  They run to Judge Felix’s house on Arquiza, where 150 refugees have taken cover.  His grandmother and baby sister lie on a bed, with the rest on the floor.  Shelling, explosions and finally, a cannon shell, flames, screams and smoke.  He and older sister Maria Ines wait in the garden, their mother dashes into the flames for her baby, emerging with the infant whose legs are severed, and head bloodied.  She soon expires.  An aunt’s head has been blown off, while his grandmother burns to death.

Fleeing into Celso Lobregat’s home, in their new shelter, his mother sustains multiple shrapnel to her head, face, arms and chest, while his sister suffers a deep leg wound.  He is unconscious with many pieces of shrapnel in his head.  His mother, an American citizen, is brought in a US Army ambulance to the UST Military Hospital, but she lies in a coma for six months.  Jesusito also survives after a craniotomy at the US Military Hospital in Muntinlupa.

Feb. 10: Massacre of scores at the Philippine National Red Cross in Ermita.  At the German Club, five Germans and 400 refugees including the family of former Ambassador to Spain Juan Rocha, the Beech y Rochas numbering 11. One of them, a 15-year-old, is raped and gutted. At the Malate Church, Fathers Kelly, John Henaghan, Peter Fallon and Joseph Monaghan, together with a group of parishioners, are marched from the convent to nearby Syquia Apartments, never to be seen again.

Feb. 11: Under artillery fire by Americans, the German sisters at Saint Scholastica’s College, seeing a spotter-Piper Cub in the air, lie on the ground to form the letters SOS and are saved.

Feb. 12: Hundreds are slaughtered at Saint Paul’s College. Doctor Rafael Moreta’s residence, other homes in Paco, the Mandaluyong Mental Hospital, and in Binondo and New Manila, suffer the same fate.

Across the street from where the Century Park Hotel now stands on Vito Cruz, the Carlos Perez-Rubio home, like the Reyes’, is set to the torch.  Escaping from their home, Carlos is instantly shot, and his son Javier, 23, bayoneted to death.  The matriarch, Milagros Alvarez de Perez-Rubio, and other members of the family and house help, together with refugees, are all killed wherever they hide.  Their son Miguel, 19, future presidential Protocol Officer, escapes the massacre because he is being held prisoner by the Japanese in Baguio. He says his sister Lupe, 17, who tried to escape, was killed, but may also have been raped.  His brother, Carlos II, was beheaded at the Masonic Temple together with his fiancée Helen McMicking and her family, some of whom were bayoneted.

Still talked about until today are the brutal killings of 40 Christian Brothers and refugees at De La Salle College on Taft Avenue—some shot and others bayoneted.  Among the dead refugees are members of the Carlos, Aquino, Uychuico and Vasquez-Prada families, their helpers and three college employees. Fernando Vasquez-Prada, 5, watches his family die. Traumatized, he is unable to speak for two years.

Doña Lorenza Bibby Baltazar is hit by shrapnel as she runs out of her home on Taft.  The mother-in-law of Cinema King Ernesto Rufino is rushed by her children, Victoria and Paco, to her doctor, who amputates her leg; she expires some hours later, but all her children can do before fleeing is to tie a handkerchief with her name on it around her other leg, to reclaim her body another day.

Feb. 13: Refugees at the Remedios Hospital numbering over 400, as well as doctor Tony Lahorra and Father John Lalor, are all killed by friendly fire.

In the same episode, tens of thousands of Malate residents lose their lives, including Josephine Perez Rocha, 33, mother of Ambassador Rocha, who in the lull, runs from a neighbor’s house to her home and is felled by an American shell.

At Philippine General Hospital (PGH), 7,000 patients and refugees cower in fear.  Edgar Krohn Jr., 16 at the time, hides under a walkway with his parents. He says American troops were firing at the University of the Philippines and the Bureau of Science next door, but PGH was never in danger of receiving American fire.

The problem at PGH is water. It gets so bad that “at one point, my 1-year-old brother, Xavier, and I had to drink our own urine,” Carlos Z. Ortoll, 3 at the time, says.

Feb. 17: PGH is liberated, but many women have by then been raped and others bayoneted.  At San Agustin Church in Intramuros, Jose Maria Zabaleta Sr. reports that “my father was killed by the Japanese, together with over a hundred Spaniards. They were marched from the church to be shot and bombarded with grenades. The next day, the Americans liberated the church and saved what was left of my family.”

In Malate, a baby had to be smothered with Araceli Limcaco’s pillow, lest her entire family, their neighbor and his maid and infant who cried a lot, be discovered in the foxhole in which they hid.

Prisoners at Fort Santiago were simply disposed of by burning them alive in their packed dungeons, after gasoline was poured over them.

In the end, seeing the futility of their cause, Iwabuchi and his men killed themselves on Feb. 26.  But not before the Manileños had been brought to near-despair and abject grief.

As for the city itself, erstwhile cochero Enrique Zobel who had harnessed his polo ponies to calesas (four-passenger two-wheeled affairs), earning fares to support his mother while his father Jacobo fought with the US Army Forces with the Far East in Bataan, arrived in Manila from Calatagan, shocked by what he beheld.  Not only was their “Most Beautiful Home of 1929” a burnt ruin. “I could see all the way across from Dewey Boulevard to Taft Avenue, and from Malate to Intramuros.”  The city was gone.

Annually in February, a day is set aside to remember at the Memorare monument in Intramuros. Composed of members whose families were war victims, Memorare-Manila 1945 Foundation has Ambassador Rocha as president and Lourdes Reyes-Montinola as vice president. At this year’s rites held Saturday, the guest speaker was Brother Armin Luistro, education secretary and former president of De La Salle University, where 40 were massacred.