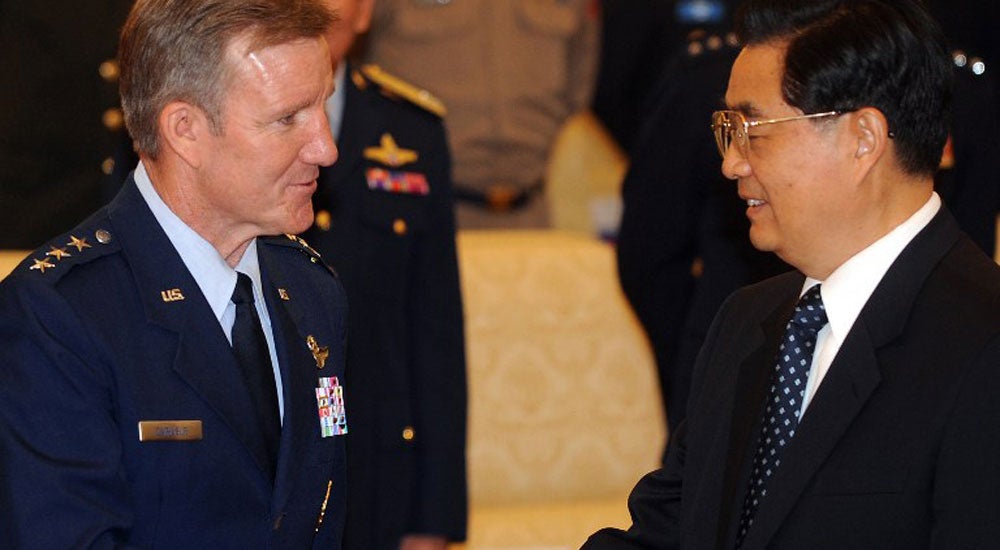 Chinese President Hu Jintao (right) meets with Lt. Gen. Herbert J. Carlisle, 13th Air Force Commander of the United States Air Force at the Great Hall of the People in Beijing on Nov. 6, 2009. China condemned the US Pacific air force commander Monday, Feb. 10, 2014, for “irresponsible remarks” after he warned it would be provocative if Beijing declared an air defense zone over the South China Sea (West Philippine Sea). AFP

BEIJING—China condemned the US Pacific air force commander Monday for “irresponsible remarks” after he warned it would be provocative if Beijing declared an air defense zone over the South China Sea.

The response ratchets up a war of words also involving the Philippines and Japan over territorial disputes in the South and East China Seas respectively.

Beijing set up an “air defense identification zone” (ADIZ) over the latter waters in November that included contested islands claimed by it and Tokyo, prompting condemnation by Washington.

Amid concerns Beijing may do the same to assert territorial claims in the South China Sea, which the Philippines calls the West Philippine Sea, US Pacific Air Force Commander Herbert Carlisle said on Sunday such a step would be “very provocative.”

At a regular press briefing on Monday, China’s foreign ministry spokeswoman Hua Chunying hit back, saying that “setting up an air defense identification zone is a reasonable right for any sovereign state to exercise.

“Relevant officials should reflect carefully on what standing they have to make any irresponsible remarks about China’s exercising its own reasonable and legitimate rights.”

Pointing out that the US and other countries also have ADIZs, she asked, “Why can only China not (do the same)?”

“We hope that relevant countries and officials can stop making irresponsible comments,” she said.

Beijing requires aircraft flying through its ADIZ to identify themselves and maintain communication with Chinese authorities, but the zone is not a claim of sovereignty.

Carlisle also criticized recent actions by Manila and in particular Tokyo, saying that many countries needed to act to de-escalate tensions.

“Some of the things, in particular that have been done by Japan, they need to think hard about what is provocative to other nations,” he said in an interview in Singapore with the US news agency Bloomberg.

Meanwhile, China and Japan have slammed each other over disputed islands, as well as Beijing’s grievances over Japan’s history of imperial aggression until its defeat in 1945.

Tensions spiked even further after Japan’s nationalistic Prime Minister Shinzo Abe in December visited the Yasukuni shrine, which commemorates Japan’s war dead, including a handful of war criminals executed at the end of World War II.

In opinion pieces in January, both countries’ ambassadors to the UK invoked the fictional evil wizard of the Harry Potter series, Voldemort, in accusing the other side of escalating the conflict.

On Friday Beijing denounced a US official’s call for China to clarify or adjust its claims in the South China Sea, calling the remarks “irresponsible.”

Beijing claims the sea almost in its entirety, even areas a long way from its shoreline, but portions are also claimed by the Philippines, Vietnam, Malaysia, Brunei and Taiwan.