SWS: Trust of Filipinos in China in the negative since 2012 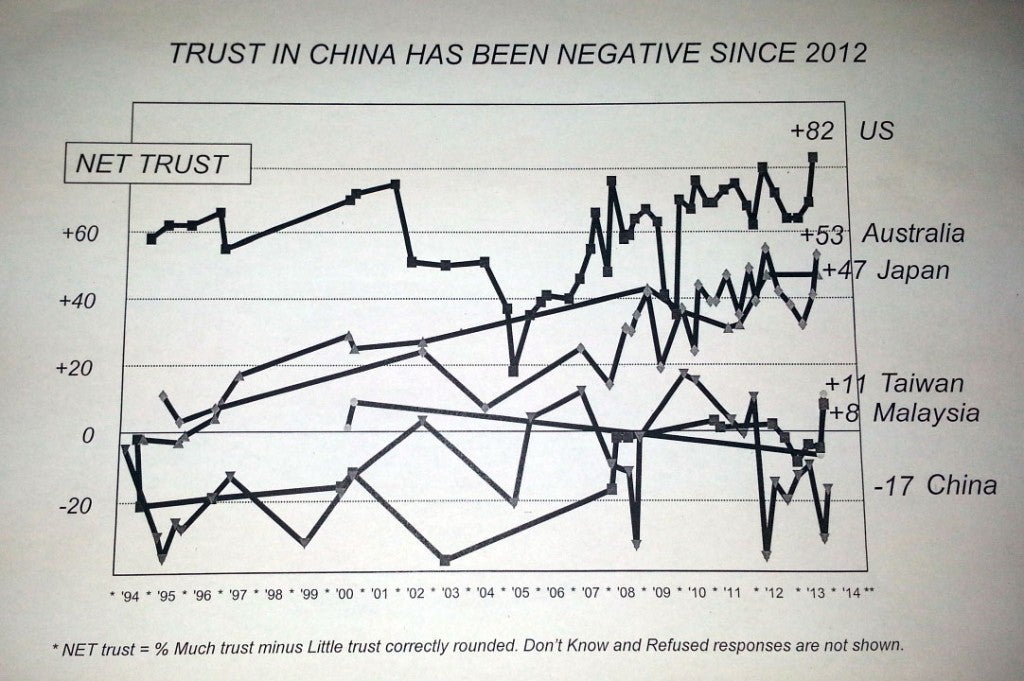 MANILA, Philippines – Trust of Filipinos in China has been in the negative since 2012 when the territorial dispute with China over Scarborough Shoal first flared up.

In a Social Weather Stations (SWS) survey commissioned by the Department of Foreign Affairs (DFA), it was found that a large majority of Filipinos support the government’s actions to challenge China, specifically when Manila filed an arbitration case against Beijing before the United Nations.

In his presentation of the survey results, Dr. Mahar Mangahas, president of SWS, said that China got a net trust rating of -17 as of 2013.

“The amount of distrust outweighs the trust in China,” Mangahas said.

He clarified that the trust rating for countries survey was not part of the commissioned study of the DFA and was a regular survey of the SWS.

China’s trust rating suffered a huge drop from around +10 percent to around -30 percent in 2012, which was the same year of the Scarborough Shoal standoff.

The United States got a record high net trust rating of +82 in 2013, Mangahas said citing the recent relief efforts conducted by US forces in the areas devastated by Super Typhoon “Yolanda” (International name Haiyan).

China’s highest trust rating for around +20 was towards the end of 2009.

The Philippines is locked in a territorial dispute with China over a large portion of the West Philippine Sea (South China Sea).

China claims the entire region as its territory including parts of the Philippines 200 nautical mile exclusive economic zone.

The Philippines has filed an arbitration case against China before the United Nations permanent court of arbitration over its territorial claims.

The SWS survey found that a vast majority of Filipinos agree with the Philippines actions in standing up against China.

“The overwhelming support of the Filipino people for the arbitration case and our rules-based approach to the WPS dispute proves that taking a principled stance, one that is based on respecting the rule of law, strongly resonates with the Filipino people,” DFA spokesman Raul Hernandez said.