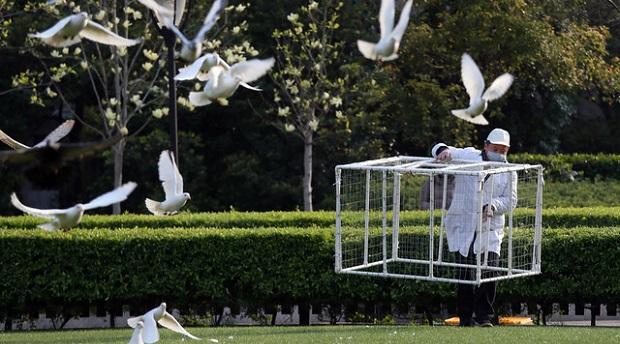 A Chinese health worker places a pigeon-trap at a park in Shanghai. AFP FILE PHOTO

MANILA, Philippines—The United Nations has sounded the alarm on the risk of the H7N9 bird flu virus progressively crossing the border from China to neighboring countries as it reaches southward across the Taiwan Strait.

The Food and Agriculture Organization said on Thursday that with the virus now detected in southern China, neighboring countries should review their emergency plans.

The virus, which produces no detectable symptoms among infected birds, is now present in 14 provinces of China as well as Hong Kong and Taiwan, according to FaO.

While there has been no evidence of human-to-human transmission, the virus has increased the health risk to humans, the FAO said.

Bird flu watchers have counted at least 290 confirmed illnesses and 66 human deaths resulting from the virus being transmitted from animals to humans, especially in live bird markets.

The FAO said that so far, there has been no sign of the virus in Vietnam or any of China’s other neighboring countries in the Mekong sub-region of Southeast Asia, such as Myanmar and Laos. All three countries share land borders with China.

However, the agency cited indications—based on previous experience with the H5N1 bird flu virus—that H7N9 could circulate across borders.

H7N9 presents a serious public health risk when there is close contact between infected poultry and humans, particularly during times of festival such as the recent lunar New Year celebrations, the FAO added.

“The key issues that need to be considered immediately are the enhancement of ongoing surveillance and a comprehensive risk communication plan to raise awareness of the threat H7N9 poses to both the animal and human health sectors,” said Hiroyuki Konuma, FAO’s regional representative for Asia and the Pacific.

“Urgent initiatives are needed to improve biosecurity in live bird markets, and a clear response plan to disrupt the transmission cycle of the virus in case of an incursion is also necessary,” Konuma said.

The warning comes a few weeks after the issuance of an order from the Department of Agriculture for a temporary ban on the importation of birds from China.

According to Agriculture Secretary Proceso J. Alcala, the order was prompted by a report from the China Animal Disease Control Center dated Dec. 21, 2013.

The report states that the outbreak of the virus was detected in the villages of Zhungzhuang, Jiaozhuang and Baoding in Heibei, China.

Alcala explained that the ban meant an immediate suspension of the processing, evaluation of the application and issuance of permits for the importation from China of such products as well as the confiscation of shipments—except heat-treated products—that have arrived.

Alcala has been rallying local poultry producers to tap in to the export market, especially the halal markets where there are Muslim populations.

He said the Philippines has worked hard to remain free of the bird flu, without needing vaccines, and that it was high time that producers benefit from this.

H7N9 ‘one of most lethal’ influenza viruses—experts