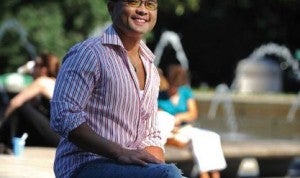 NEW YORK—After 12 days of agonizing wait, friends and relatives of journalist Randy Gener can now heave a sigh of relief as the suspect in the brutal attack has been arrested.

The police on Wednesday, Jan. 29, nabbed Leighton Jennings, a 24-year-old Queens resident and identified him as the person who punched Gener after a dispute. Jennings was charged with second-degree assault in an early-morning attack on Jan. 17 that left Gener with severe head trauma that required him to undergo surgery.

The New York Times reported that according to detectives, Jennings had been seen by witnesses and on surveillance video engaged in a confrontation with the 46-year-old Gener, shortly before the assault, around 3 a.m. on Jan. 17 near the corner of 54th Street and Seventh Avenue.

“The police said it appeared that the confrontation began when Mr. Gener inadvertently bumped into a woman, who was with Mr. Jennings, as he walked along the sidewalk. A dispute between them grew heated, the police said, and Mr. Jennings stepped in and punched Mr. Gener, who fell to the pavement, cracking his skull,” the news report said.

“The family of Randy Gener would like to thank all of the people who have helped move along the investigation. We are thankful to the New York Police Department, particularly the Hate Crimes Task Force, for conducting a thorough and swift investigation. We are eternally grateful to the community (particularly the Filipino-American and arts communities) for raising awareness about this incident, for showing solidarity and generosity through organizing vigils and events, and for creating a fund to support ongoing medical expenses. Finally, we are thankful for all who have benevolently offered their services, particularly the New York City Anti-Violence Project.

“We are pleased and relieved that a suspect has finally been apprehended and trust that the NYPD and District Attorney will make all efforts to bring justice for Randy. At this time, we are focusing on Randy’s healing and moving forward together as a family.”

There has been a groundswell of support coming from the communities where Gener belongs.

Blair-Driessler posted a short message on Gener’s Facebook wall on Friday, Jan. 24, about a week after the attack. In it, she said that on his way home from a party on Jan. 17, Gener was “brutally assaulted a block away from home. He suffered severe head trauma which required brain surgery to be performed. He is currently in the Neuro ICU.”

Liz Casasola and Nicole Ponseca started a fund-raising page online to raise funds to help the family defray medical costs. Within 48 hours, the site generated around $38,000 in donations. As of Jan. 30, Thursday, the amount has reached more than $50,000 given by almost 1,000 individual donors.

On Sunday, friends and relatives gathered on the corner of 53rd Street and Seventh Avenue for a candle-light vigil. More than a hundred friends and supporters joined, including strangers who read about the attack on social media sites such as Facebook and Twitter.

“He can talk but it is hard for him to have a straight conversation like we’re having right now. We’re taking it day by day. We’re hoping that a full recovery will take place and we know it will take quite sometime,” Blair-Driessler added. “We’re hanging in there.  We’re appreciative of all the support being given.”

The following day, Gener’s colleagues from the Fil-Am Press Club of NY spearheaded an inter-denominational prayer vigil at the Kalayaan Hall of the Philippine Center.

“When I first learned about what happened with Randy, I was very disturbed that such an accomplished, peace-loving and good-natured individual would be a victim of a violent, senseless act,” Consul General Mario de Leon Jr. said as he described Gener as someone who “lends his support to others, and a valuable member of the Filipino-American community, a good friend, and a world-class talent.”

He read a statement from Ambassador José L. Cuisia Jr., which said in part, “This despicable crime has caused much sadness and uneasiness in the Filipino-American community, especially in media circles.”

“The support of the Filipino community has been amazing as well as Randy’s colleagues in theater and journalism has been amazing. It’s the Filipino community that has wrapped their arms around us at this time to help us figure out what to do next,” Blair-Driessler told the Asian Journal during Sunday’s vigil. Blair-Driessler is based in San Francisco and she flew in when she found out about what happened.

Since the assault on Jan. 17, the motive of the attack has remained a mystery. Some suggested that it was a hate/bias crime against the openly gay journalist. Others say that the attack may have something to do with the “knockout game” where teens select a random passerby to knockout with a single punch. Or it may have been just a random act of violence.

“We are not 100 percent sure,” Blair-Driessler said during the press conference. “It is a possibility, but because I don’t know myself, it wouldn’t be a fair representation to label it so. So I think at this stage we are keeping our minds open to more than labeling the situation, but rather to finding out the truth of what

Because nothing was taken from him, detectives from the Police Department’s hate crimes unit investigated the possibility that the attack was motivated by bias, but they found nothing to indicate the assault was a hate crime.

“That was how they were able to find me,” Nisbet said. “Somebody called 911 and when the EMS checked, they found his wallet intact. They saw his driver’s license and realized that the address was just across the street so they went to our building and asked our doorman if they knew who Randy was. Then they knocked on our door.”

Gener was found unconscious a block away from where he and his husband lived on Seventh Avenue.

Married for two years now, Gener and his husband has been together for 19 years. Nisbet is hopeful that Randy will be able to get through this.

“He’s a strong guy, he has strong will. He has his mother’s heart,” Nisbet said.