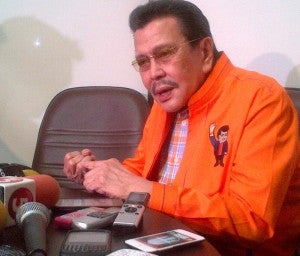 MANILA, Philippines—Manila Mayor Joseph Estrada said the city government will seek the help of the ambassador of China regarding efforts to appease Hong Kong, which insists on an apology from President Aquino over the hostage-taking that killed Hong Kong tourists in 2010.

Estrada said the ambassador is expected to grace the solidarity dinner for Filipino-Chinese business clubs sponsored by the city government in line with the Chinese New Year festivities.

“I’m sad about it and I’m worried about our OFWs there. There are 160,000 of them. I hope they will not be affected by this,” Estrada said.

“(Hong Kong officials and representatives of the victims) still insist that the President should be the one to apologize. I told them that it’s the mayor who is responsible for what happens in a town or city,” Estrada, a former President, added.

His rival for the mayoral post, Alfredo Lim, was the mayor when the hostage-taking happened.—Erika Sauler