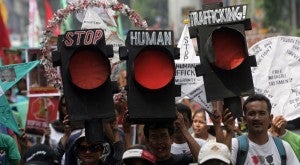 MANILA, Philippines – A prosecutor of the Department of Justice (DOJ) said in a House of Representatives hearing that a number of high-ranking embassy officials may be allegedly involved in illegal recruitment and human trafficking of Filipinos to Kuwait.

Assistant city prosecutor Darlene Pajarito, however, clarified on Wednesday that preliminary investigation only points to administrative violations and not criminal acts. Mandate over administrative charges is left to the department.

The task group is still looking at criminal charges, she added.

“We are still trying to see if they are responsible even for conspiring,” the prosecutor said.

Pajarito said that they sent notices of subpoena to these top officials but they either ignored the notices or sent these back.

At the sidelines of the hearing, Pajarito told INQUIRER.net that these officials have positions higher than an Assistant to Nationals head, which is the position of one of the accused Daligdig Tanandato.

The inquiry was held amid alleged abuses on 29 women at the hands of embassy officials and their recruiters.

Only 15 decided to pursue action against the officials.

Akbayan Representative Walden Bello of the overseas workers affairs committee said that he noticed only lower staff members were charged.

The victims’ complaints ranged from their agencies requiring them to work for long hours, maltreatment from their employers, while one complained she was sexually abused by her employer and his son.

The task force also forwarded to the Office of the Prosecutor of the City of Manila criminal cases for syndicated illegal recruitment against Amor Decepeda and Regina Padiernos, employees of Ascend International Service in Manila; Nora Pilpa Sevillano, a Tacloban-based employee of the recruitment firm; and Leojane Tacang, secretary of Suad Alderbas Manpower Recruitment Office, counterpart agency of Ascend.