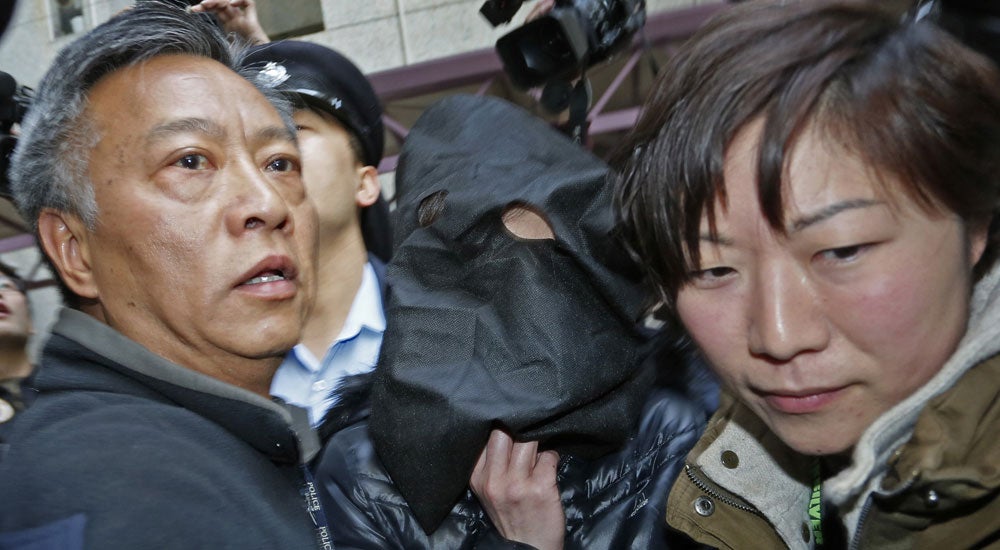 A 44-year-old woman surnamed Law, covered her head with a black hood, center, is escorted by police officers for an investigation at her home in Hong Kong, Tuesday, Jan. 21, 2014. Hong Kong police filed charges on Wednesday against Law, which include two counts of wounding, one of common assault and three of criminal intimidation. AP

HONG KONG—A Hong Kong mother-of-two was charged Wednesday with a serious assault on her Indonesian domestic helper, in a case which sparked a march by thousands and expressions of concern from Indonesia’s President.

Law Wan-tung, 44, is accused of causing grievous bodily harm to Erwiana Sulistyaningsih, who is now undergoing hospital treatment in her home country.

Law was arrested Monday at Hong Kong airport while about to fly to Thailand.

She was also charged with assault causing actual bodily harm, common assault and four counts of criminal intimidation—charges related either to Sulistyaningsih or to her treatment of her two previous Indonesian domestic helpers.

Prosecutors told a court where Law appeared Monday that she turned household items such as a mop, a ruler and a clothes hanger into “weapons” against her maids.

Sulistyaningsih’s ordeal has sparked international concern over the rights of domestic helpers in the southern Chinese city, with thousands marching on Sunday to call for justice for abused maids.

Sulistyaningsih left Hong Kong this month after allegedly being abused for eight months.

One of her doctors in Indonesia told AFP Tuesday she was still unable to walk following the mistreatment, which included having her head smashed repeatedly against a wall.

A few hours after the charges were laid by police, Law appeared in court in the Kwun Tong district with her head bowed. Her husband watched from the public gallery.

She was granted bail amounting to HK$1 million ($130,000) but must report daily to police before the next hearing in March.

The court was told that Law had sent death threats to Sulistyaningsih and also intimidated the two other employees between 2010-2014.

Defense lawyers argued that there was no medical report to support the claims against her.

Hong Kong is home to nearly 300,000 maids, mainly from Indonesia and the Philippines, and criticism from rights groups over their treatment is growing.

In September a Hong Kong couple were jailed for savagely beating their Indonesian domestic helper, including burning her with an iron and hitting her with a bicycle chain.

The government stipulates a minimum wage and other conditions for foreign domestic helpers, but unscrupulous employers and agencies sometimes ignore this.

This followed a phone call the previous day from Yudhoyono, who told Saputro he was sad and angry at the case and had raised it with Hong Kong’s leaders.

“(The money) is for her treatment. If there is something left, it will go toward her future,” Saputro said, adding her daughter had told him she wanted to go to university.

Saputro also revealed he had initially refused to let his daughter work overseas but gave in after she asked several times.

“I finally said she could go but only if it was to Hong Kong, because at the time I thought there was no problem working in Hong Kong,” he said.—Dennis Chong