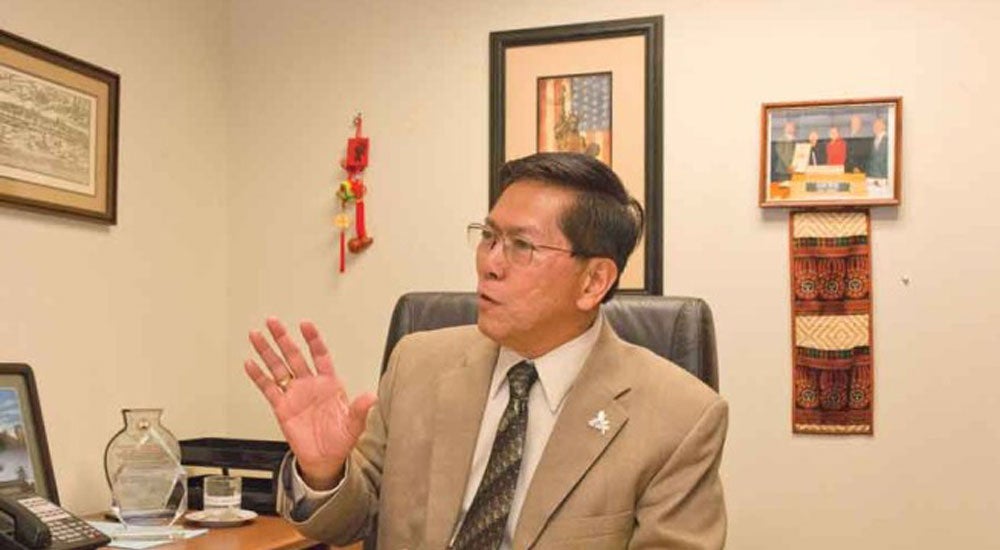 LOS ANGELES—Filipinos are slowly making their mark in the political realm in America. In California alone, a number of Fil-Ams have secured positions in the corridors of power, where they can create positive change for the Filipino community in the Golden State.

However, only a few can compare to the tenure, experience and legacy of the City of Walnut Mayor Antonio “Tony” Cartagena.

Born and raised in Basilan, Mayor Cartagena is a longtime Walnut City councilor. Today, he is serving his fourth term as Walnut City mayor (he was appointed in July 2013). He previously held the post in 2002, 2006 and 2010.

Cartagena is passionate about promoting diversity in a previously Caucasian-dominated city council. A more diverse council can be more responsive to the needs of all its constituents, he said.

His goal is to preserve Walnut’s rural atmosphere by preventing the proliferation of street gangs, conserving Walnut’s open spaces and continuing the tradition of excellence in the local school district.

Walnut, an affluent city in Los Angeles County, spans 8.9 square miles and hosts around 30,000 residents. He has worked hard with his colleagues to preserve the rural charm of the primarily residential community that boasts 600 businesses.

This work includes over $1-million worth of improvements on Valley Boulevard and Amar Road and $2 million worth of work in developing the Quiet Zone Project in April 2013.

For the first time in the Walnut’s history, because of the Quiet Zone, locomotive operators are now prohibited from sounding their horns while passing through a three-mile stretch of track that runs near Walnut.

Another key project that Cartagena pushed to develop in the city was the Neighborhood Watch program. Officers from the LA Sheriff’s Department would be dispatched efficiently throughout the city, based on reports and calls coming in from the neighborhood watch system.

Cartagena received his formal education at the Ateneo de Zamboanga University (Xavier University), where he earned his BA degree in History and BS degree in Education. While at the Ateneo, he gained experiences in leadership and community-building, as a member of the Ateneo Catechetical Instruction League (ACIL).

As a high school and college instructor at Claret College, of the Claretian Missionaries in the Philippines, he served as an advisor for the Student Advisory Council and was also involved in scouting programs, sports activities.

At this early point in his professional career, Cartagena was already learning how to build and empower a community through leadership in the school setting.

“I enjoyed serving as a college and high school educator at Claret School,” Mayor Cartagena told Asian Journal in an exclusive interview at his office in Walnut. He said that working there proved to be challenging and worthwhile, because he made a difference in the lives of his students and their respective endeavors.

In November 1975, Mayor Cartagena moved to California, after being petitioned by his mother. He then worked for the LA County’s financial services division as a Patient Financial Services Quality Control Worker (PFSQCW) supervisor, and Interim Head PFSQCW.

After 35 years of exemplary work in the LA County Hall of Administration, he was given a commendation by the LA County Board of Supervisors in October 2010. Later on, Cartagena retired to spend more time with his family, church and community.

As a community-oriented resident of Walnut, Cartagena wears many hats. He is on the advisory board for two prominent Catholic Church communities: St. Martha’s in Valinda and St. Lorenzo Ruiz in Walnut. He has also dedicated many years of service to the Walnut Family Festival Committee, which he served as chair in 1998.

Cartagena remains very active in the Filipino-American communities in places where he has resided: Baldwin Park, West Covina and Walnut. In fact, community work is part of the reason why he entered politics.

In the early ’90s, while working with the St. Martha’s Church community, Cartagena became part of the movement that pushed for the building of a new church in Walnut (which eventually became St. Lorenzo Ruiz Church).

However, the construction plans included a fusion of traditional architectural elements and modern design techniques, an approach that did not sit well with the then incumbent officials of the Walnut City Council.

The council’s resistance made community advocates decide it was time to become involved in politics and civic activities themselves. They elected one of their own, Bob Pacheco, into the city council so that their voices could be heard in city governance.

Around the same time, Cartagena was appointed into the Transportation Committee. This appointment served as the launch pad for his political career. The rest, as they say is history.

According to Cartagena, he didn’t face any difficulties in making the decision to enter politics, given his community service experience in community service. His wife was initially hesitant about the new phase in their lives, thinking that politics in California would be similar to politics in the Philippines.

However, Cartagena assured his wife that this was not the case. Aside from the Transportation Committee, he has also served in the Planning Commission and in the Cultural Awareness Resources Exchange for Law and Code Enforcement. He was first elected into a four-year term in the city council in 2000, and was re-elected in 2004, 2008 and 2012.

Cartagena defines public service as a field, where individuals work to provide services that greatly benefit the community. Simplistic as it may be, this core value is at the center of Mayor Cartagena’s leadership.

It has also kept the mayor grounded in his work, as it always reminds him of the difference between being a public servant and a career politician who uses local politics as a stepping stone to higher public office or prolong their grip on power.

“Career politicians could be detrimental to our community if they focus more on preserving their job,” Cartagena said. This, he added, often results in politicians allowing special interest groups to render influence over city matters, enriching themselves, as they prepare to campaign for higher office.

However, Cartagena recognizes a special kind of career politicians who, like him, choose to remain in local government office so they can have more time to pursue the “greater good of the city.”

With more experience in local office, a leader becomes better and better in delivering the true public service that the community deserves, the mayor said.

As a Fil-Am trailblazer in public service, Cartagena has this to say to those who want to follow in his footsteps: “Aim high. Get an education. Find a role model. Apply for internships. Be organized and positive. Learn the importance of teamwork, and volunteerism. Being a leader means not being afraid to fail and being ready to always try again. Every single day is a learning process.”