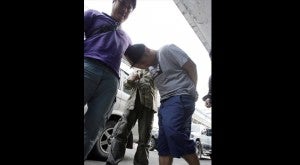 National Bureau of Investigation operatives arrest two Canadian nationals and a Filipino allegedly involved with a notorious Mexican drug cartel on Wednesday, January 15, 2014, in a dawn raid on Unit 301 of The Luxe Residences on 28th Street in Bonifacio Global City, where shabu or Metamphetamine Hydrochloride, ecstasy and cocaine worth about millions of pesos were seized. INQUIRER FILE PHOTO

MANILA, Philippines—Assassins hired by the Sinaloa Mexican drug cartel to eliminate its members who were arrested last month by the National Bureau of Investigation could already be in the country, according to a top bureau official.

“We received reliable intelligence report about the supposed assassins, but we also have to validate them,” said NBI Director Virgilio Mendez.

“Pending our own validation, we have alerted concerned agencies of the supposed assasins,” said Mendez, adding that the information came from a foreign antidrug law enforcement agency.

He quoted foreign narcotics agents as saying that the notorious Sinaloa drug cartel that is alleged to be behind the illegal drug operation in a cock farm in Lipa, Batangas, which was busted in a Christmas Day raid last month, has been classified as the largest source of the illegal drugs that enter United States.

Mendez said two of those arrested in the Christmas Day raid were Canadian citizens Barry Espadilla and James Riach. The two are facing murder, weapons and drug charges in Canada.

He said the NBI is now conducting a separate investigation into how the two suspects managed to enter the country despite such records.

Ruel Lasala, deputy director for NBI Investigative Services, said operations against other members of the Sinaloa drug cartel in the country is being intensified following the information obtained from local informants and foreign antinarcotics agents.

Lasala added that security measures around the arrested suspects had been tightened in response to the threat against them.

Eric Isidoro, supervising agent of the NBI antinarcotics section, showed the Inquirer photos and names of the hired gunmen but said they were embargoed for publication.

Read Next
China plans new patrol in disputed West Philippine Sea
EDITORS' PICK
Look Through: The fate of impounded stray dogs
House energy committee chair Arroyo bats for cheap electricity
Unleash the photographer in you this World Photography Day with vivo smartphones
What to watch out for when selecting a video surveillance solution
23,000 cops to be deployed nationwide for school reopening
DOH says COVID-19 cases plateauing, but public shouldn’t be ‘complacent’
MOST READ
Sharon Cuneta asks for prayers for friend in ICU who suffered silent stroke
Korina Sanchez reunites with former ABS-CBN co-anchors Julius Babao, Cheryl Cosim
Light therapy could be the answer to your sleep problems
Solons file resolutions seeking probe on ABS-CBN, TV5 merger
Don't miss out on the latest news and information.