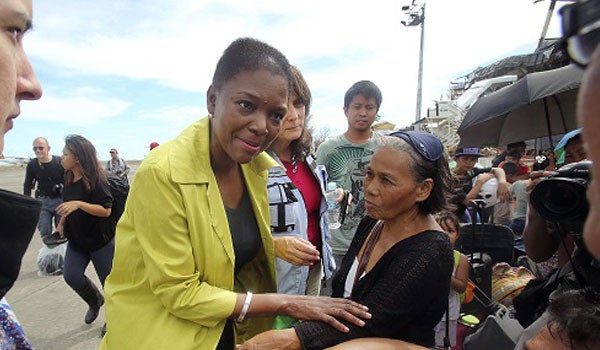 United Nations Undersecretary General for Humanitarian Affairs Valerie Amos speaks to survivors at the airport in Tacloban City on Nov. 13, 2013. Amos will make call on Monday, Dec. 16, for donors to raise $791 million to fund a yearlong Supertyphoon “Yolanda” Strategic Response Plan that will help the most-affected victims for a longer-term recovery. AP PHOTO/WONG MAYE-E

The United Nations is expected to launch Monday an appeal for donors to raise $791 million to fund a yearlong Supertyphoon “Yolanda” Strategic Response Plan (SRP) that will help the most-affected victims for a longer-term recovery.

The amount is more than two-and-a-half times the $301 million that the UN asked for on Nov. 12, when Amos visited the worst-hit areas four days after Yolanda (international name: Haiyan) made landfall. That initial target was itself increased to $348 million on Nov. 22, as relief efforts went into high gear.

Rodrigue Vinet, acting Philippine representative of the UN Food and Agriculture Organization (FAO), told the Inquirer that $38 million of the total amount was earmarked for the agriculture and fisheries sector.

“Restoring agriculture is a top priority of the Typhoon Haiyan SRP,” Vinet said. “The FAO is appealing for [such amount] to ensure that affected communities regain self-sufficiency, primarily with the restoration of local economies, agriculture and fisheries.”

Under the SRP, the FAO will support around 128,000 households spread in the Visayas, Bicol and Mimaropa regions.

Vinet said the plan, which runs until November 2014, was designed to support the Philippine government’s efforts on immediate relief and complement Malacañang’s Yolanda Rehabilitation and Recovery Plan.

In the immediate aftermath of Yolanda, the FAO accounted for $25 million of the UN’s flash appeal for the victims. The funds that did come in were used to provide seeds and inputs to rice farmers who can replant on more than 55,000 hectares.

Last week, the FAO again made an urgent appeal for $5 million to cover the emergency response for the restoration of livelihoods among 13,000 fishing and coastal households.

This was part of the yearlong SRP and meant for the rehabilitation of small-scale infrastructure, such as fish landing sites, through the provision of materials and cash for work.

Through the strategic plan, the FAO will also need $18.84 million to help build resilience among severely affected rice and corn farmers, numbering some 61,000 households.

It earmarked $6.7 million to provide income and bring back food self-sufficiency to 19,600 households of small-scale coconut farmers.

Another $2 million was set aside to benefit 18,000 households through the rehabilitation of agro-forests and the establishment of community-based tree nurseries.

Finally, under the FAO portion of the strategic plan, $4 million would support 17,000 households engaged in backyard livestock production.

Officials of the FAO in the Philippines had clarified reports that all their post-Yolanda efforts were in cooperation with the Department of Agriculture and meant to complement the department’s own activities.

Last week, Luiza Carvalho, UN resident coordinator in the Philippines, said the task of meeting the needs for humanitarian and early recovery in the calamity-stricken areas had remained enormous despite progress in providing victims with food, shelter and other critical help.

Carvalho took part in a joint international mission to Guiuan town in Eastern Samar, and Ormoc and Tacloban cities in Leyte province.

The Department of Foreign Affairs (DFA) will inventory pledges made by foreign donors to rehabilitate areas in Central Visayas following reports that some aid may not have reached the intended beneficiaries.

Assistant Foreign Secretary Raul Hernandez, DFA spokesman, said the government had scheduled a pledging session next week, which the department would monitor to ensure that the donations reach their beneficiaries and are well spent.

The output will be posted online by the Department of Budget and Management (DBM), he said.

“What we are trying to do now is to be transparent with this money and we hope that we are able to account for every inflow of this money and the use and management of this assistance through the Foreign Aid Transparency Hub that is being managed by the DBM,” Hernandez said.

The DBM tracks down donations and assistance coming from the UN, the Asian Development Bank and the Arab Gulf Program for Development, among others.

Early donations, worth $12 million, have been released to the Philippines and are now being administered by the Department of Social Welfare and Development and the National Disaster Risk Reduction and Management Council, Hernandez said.

He spoke about the Philippine foreign policy at a forum, which the DFA organized at Saint Louis University in Baguio City on Friday.

“With the incident in Yolanda, a number of countries came to offer pledges to us … We are a nation that is friendly, [so] everybody is helping us,” he said.

“Hopefully with the pledging session, we will be able to raise the needed amount in order to rehabilitate and also reconstruct and rebuild the areas affected by Yolanda,” Hernandez told reporters after the forum.

“We are very inspired by the outpouring of assistance and donations coming from the international community,” he said.

According to him, at least 64 foreign donors, governments and multilateral organizations have pledged and given assistance to the victims. Among the biggest donors are Japan and the United States.

“Many of these pledges are going to the [local] partners of foreign donors, such as nongovernment organizations, charitable institutions, foundations, churches and other aid agencies,” he said.—With a report from Desiree Caluza, Inquirer Northern Luzon

We have let people down, says UN humanitarian chief

Read Next
Vietnamese rescued from ‘Yolanda’ fly home
EDITORS' PICK
Is it safe to talk politics again at family gatherings? ‘The Reconciliation Dinner’ shows us what that’s like
vivo’s coming to town to grant wishes with more holiday promos
Pagasa: Warm, sunny Sunday in most parts of PH
House energy committee chair Arroyo bats for cheap electricity
EDITORIAL: To a bike-friendly future
The Best Tech Gifts For The 2022 Holidays
MOST READ
LOOK: Vhong Navarro transferred to BJMP detention facility in Taguig
The Elephant Man in the Senate
Posh village as ‘shabu’ haven
LOOK: Zanjoe Marudo bonds with Ria Atayde, her family
Don't miss out on the latest news and information.