Children’s charity to widen drive vs trafficking of ‘Yolanda’ victims 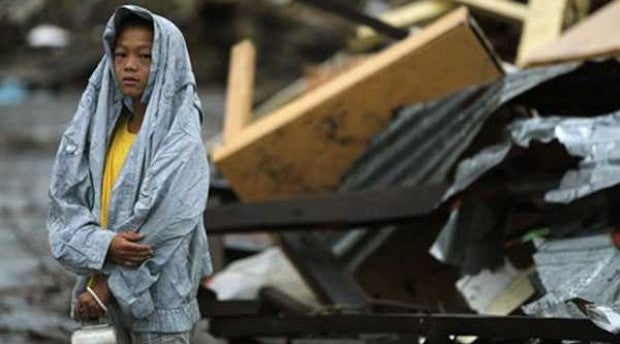 “Experiences from similar disasters show that the potential for human trafficking, particularly of women and children, increases after a humanitarian crisis such as Typhoon Haiyan,” Plan International (Plan) country director Carin van der Hor said in a statement.

With this in mind, the charity will extend its antitrafficking project, first launched in 2005, for another two years, with a focus on the disaster zone.

It will also work with the government to raise awareness in communities affected by Yolanda to help residents understand the risks of trafficking within and outside the Philippines, she said.

Antitrafficking measures would also be boosted at airports and seaports where trafficked women and children may be removed from the country or sent to large cities.

Plan said it reported to the government the recruitment of a small number of adolescents from Samar, one of the areas worst hit by the typhoon, as suspected trafficking cases.

It said the Department of Social Welfare and Development is now investigating the case of the young people, who were sent to work in Angeles City, which has a large red light district.

Supertyphoon Yolanda left nearly 8,000 people dead or missing in one of the worst natural disasters to hit the Philippines, flattening entire towns and displacing more than four million people.

A 2013 US state department report on global human trafficking described the Philippines as “a source country, and to a much lesser extent, a destination and transit country for men, women and children subjected to sex trafficking and forced labor.”

The Philippine government has said it is investigating the case of five Samar high school girls recruited to work in Manila after Yolanda struck the island.

A Plan spokesperson in the Philippines told AFP Friday she is checking whether the Angeles case involved the same young people.

Earlier this week, British, Australian and Filipino police said they had dismantled a pedophile ring that streamed live sexual abuse of Filipino children as young as 6 over the Internet, with victims’ parents involved in some cases.

Van der Hor said Plan’s Community-Based Anti-Trafficking in Persons project has worked with the social welfare department since 2005 to prevent trafficking and protect, care for and rehabilitate survivors. AFP