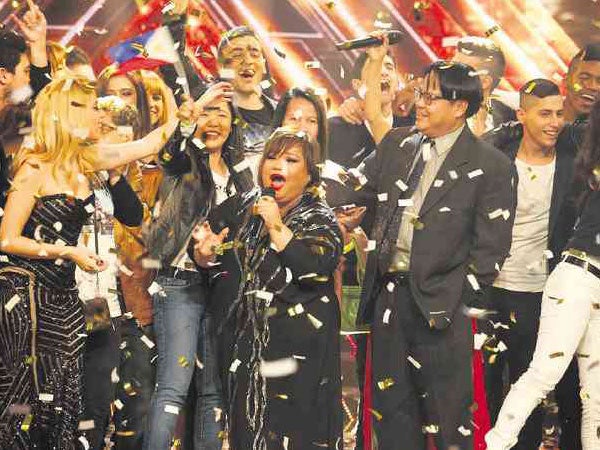 TOAST OF ISRAEL Rose Fostanes, a Filipino caregiver from Taguig, wins the first season of Israel’s “X-Factor,” with her rendition of Frank Sinatra’s “My Way.” X-FACTOR ISRAEL FACEBOOK

This was the heckling suffered by Rose Fostanes, 47, back when she was joining local singing contests in the Philippines.

Now the caregiver in the Middle East is garnering only praises, after being declared the winner, despite being the lone foreign contender in the singing contest “X-Factor Israel.”

In an interview at Fostanes’ home community in Barangay (village) Calzada-Tipas, Taguig, Fostanes’ younger sister Gina Camposano, 45, said the family was initially shocked at the win, despite their confidence in Fostanes’ “No. 1” voice.

“We were surprised, since usually these contests look for the ‘package deal,’ someone who also looks like an actress,” Camposano said in Tagalog, describing the usual “young and sexy” women sought by judges in these competitions.

Fostanes’ cousin Ann Marie, 40, recalled that while Fostanes had been joining local singing contests since she was four, “she would lose sometimes just because her opponent was fairer or thinner.”

With show business usually favoring only the fair, “I was scared that if she lost, that would make her depressed or give her an inferiority complex,” Camposano admitted.

“It’s not that I underestimated her. I knew she was good. But let’s admit it: these contests usually look for the whole package,” Camposano said, narrating previous local contests in which the audience would jeer at her eldest sister, even call her “a pig.”

But Camposano was firm in so far as her “Ate Osang’s” good qualities were concerned: “She is loving and generous. Everything she earned, she would spend on us, for our family’s food, medicines and house, and for our education.”

Fostanes was the eldest in a brood of four and was prompted to become the breadwinner of the family at a young age after their father left them with a sickly mother.

Ann Marie said that as teens, they would sell fruits in Manila city for cash. “But singing was really her passion. Even when we were selling fruits for a living, she would sometimes join contests, or sing in restaurants. Singing was how she relaxed,” the cousin recalled.

Fostanes started working abroad at 23, first as a househelp in Egypt. She then spent a decade in Lebanon, before spending the last seven years in Israel.

In all this time, she continued to send money home to her family, having their old house in Taguig expanded. “She couldn’t really save for herself. Everything went to us,” Ann Marie said.

She added that Fostanes rarely went back home to the Philippines, because it was too expensive. The last time Fostanes was able to make it home was in January 2011, for her birthday.

Camposano and Ann Marie said they had yet to talk to Fostanes since she won the contest early Wednesday morning, Philippine time. Most of the family watched the live-streamed contest online. Their other sister, Nancy, and Fontanes’ girlfriend, Melinda Adel, were the only ones flown off to Israel for the finals.

Fostanes’ family members noted with pride that she has joined the rank of beauty queens and athletes who have lifted the Filipinos’ spirits by making a mark on the international stage. “She’s also lifted the curse on ‘My Way,’” Ann Marie joked, referring to Fostanes’ winning Frank Sinatra cover for the finals. The song is notorious in the Philippines for causing brawls in karaoke joints.

“For everything she’s given, finally, it’s her turn to taste the good life,” Camposano said.

In a statement, Taguig Mayor Lani Cayetano also praised Fostanes: “We are all so proud of Osang here in Taguig. She is indeed an epitome of hope, her powerful voice touching hearts not only of Israelis, but of all of us.”

She added: “We hope that she serves as an inspiration to all of us to reach out for their dreams.”