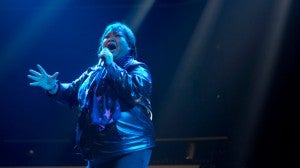 In this Wednesday, Jan. 1, 2014 photo, Rose Fostanes sings during a rehearsal of the X-Factor Israel in Tel Aviv. The 47-year-old Filipino caregiver has emerged as the newest star of Israeli reality television, putting a human face on the thousands of foreign workers who toil away in menial, back-breaking jobs in this country. AP

It said Fostanes beat three other finalists with her performance of Frank Sinatra’s “My Way,” Alicia Keys’ “If I Ain’t Got You,” and Eurythmics’”Sweet Dreams.”

Earlier, the Associated Press reported that the 47-year-old Filipina, who has worked in Israel for the past six years, had taken “X-Factor Israel” by storm and emerged as a national phenomenon, mobbed by fans wherever she goes.

“It’s a big change in my life because before nobody recognized me, nobody knew me. But now everybody, I think everybody in Israel knows my name. And it is very funny,” AP quoted her as saying.