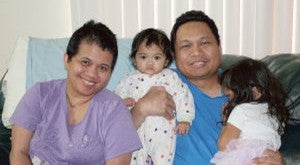 Emily and Jojo Nanez with daughter. PHOTO BY GONZALES INQUIRER

LAS VEGAS—A young Filipino family in Gonzales, Texas, is in danger of being deported back to the Philippines because of an unfortunate event: The wife got sick.

Jojo Nanez and his wife, Emilyn, both originally from Davao City, are in the United States on the latter’s working visa, which is expiring in July.

Because Emilyn has suffered a stroke and can’t work anymore, the family, along with their two young daughters, will be deported from their Texas home.

According to the Gonzales Inquirer, which reported their story on Jan. 3, the Nanez family is working with a New York-based immigration lawyer, but unless Emilyn is able to work again, deportation is a distinct possibility.

“If they find out you’re working, they deport you back home,” Jojo Nanez told the newspaper. “Both our visas expire in July. It would be much easier on us if the hospital would continue to extend her H1V (working visa), but it can’t happen because she can’t work.”

Since her stroke in June last year, Emilyn has been on disability leave. It’s not certain that the Gonzales Healthcare System, where she worked as a lab technician, will renew her visa inasmuch as she can’t work.

Jojo, a professor back in the Philippines, is in the United States as a dependent and restricted from working. Their two daughters, Almira Isabelle, who is almost four, and Arwen Faye, who will celebrate her first birthday in March, were both born in the US.

These circumstances may allow them to prevent deportation, but Jojo said the immigration lawyer informed him that there is no assurance they will not be sent back home.

Jojo, 38, and Emily, 34, arrived in Texas from Davao five years ago. With her work visa, Emily had worked as a lab technician since 2008.

Things were reportedly going well for the couple until Emilyn suffered a stroke after the birth of their second child in March 2013.

She had a second stroke in June of that same year, rendering her unable to work because she became partially paralyzed.

Jojo said he remembered his wife coming home from work one night saying her blood pressure was high, and he thought she would just sleep through it and be alright.

But around 10 a.m. the following day, Emily began screaming in pain and asked him to get her some Tylenol. “So I went to the kitchen to get it,” he says, “and when I got back she was slurring her speech. I called 911 and EMS got here minutes later.

“I haven’t been able to work since the stroke,” Emilyn said. “Now I am on short-term disability.”

Jojo said that in a way, he was happy that his wife got sick in the United States. “Had it happened in our country, she might not have survived because hospitals there demand down payment before treatment,” he says. “But here, you get treated and receive the bills later,” Jojo told the Gonzales Inquirer.

Since Emilyn has to get blood work done on a weekly basis, it would be virtually impossible for her to get it done in her country because she wouldn’t be able to front the bill for it.

“In Philippine hospitals, most patients are put in a wheelchair or in a bed beside the registration and just wait to die,” Jojo said. “It’s sad, but that’s the way it is. She didn’t do anything wrong. It just happens that she got sick.”

So far, no Filipino-American organization has come to the aid of the couple, even though the television program “Balitang America” has reported their story.

Under an online petition asking the US Department of Homeland Security to designate the Philippines with a Temporary Protected Status (TPS) the Nanez would qualify and be protected from deportation.

The petition posted in the We the People website of the White House seeks to put all deportation proceedings against Filipinos on hold in the wake of Supertyphoon “Yolanda” (international name: Haiyan) so these Filipinos can help in the rebuilding efforts.

The movement has gained support of some members of the US. Congress and President Aquino has formally asked the Obama administration to approve the petition.