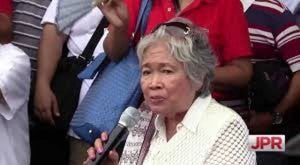 NEW YORK—A former high-ranking Filipino official on Jan. 4 told a Cleveland, Ohio-based online radio program that the Philippine government alone may not be able solve the worsening problem of graft and corruption.

Leonor Briones, the national treasurer during the time of deposed President Joseph Estrada, said that despite the anticorruption efforts by the Aquino administration, it remains rampant “on all levels of government” that investigates it, and that finding a solution should be in the hands of the Filipino people.

“It is not the fight that government can victoriously conquer; it has to be us,” she said. “Only Filipinos can solve corruption because they know already the technicalities and they know how a person becomes corrupt.”

Briones made the remarks in an exclusive interview (http://mixlr.com/voice-it-radio/showreel/going-global-wdavid-delgadowleonor-briones-1613/) via Skype with “Going Global” host David Delgado of voiceitradio.com (http://voiceitradio.com/), a 24-hour talk radio based in downtown Cleveland that features live discussions and forums.

The interview with Briones, organized by a number of Filipino-American groups both based in the United States and the Philippines, including Global Filipino Nation and Ateneo for Better Philippines, was the first of a two-part series.

One of the organizers, Victor Barrios of Global Filipino Nation and Tanggulang Demokrasya, says that “the opportunity of having the global interview came to our doorsteps,” and that they saw the need to do it with a US-based media outlet to “increase awareness” and have a “greater impact than a domestic [Philippines] interview.

His group chose Briones, according to Barrios, because she is not only knowledgeable and “eminently qualified to discuss fiscal corruption” but also “is brave.”

Marred by several technical interruptions, the interview lasted over an hour, with no commercial breaks.

Briones said that while Aquino had been successful in filing plunder charges against several government officials and big personalities, it “is a temporary victory,” and some officials that have been identified in corrupt practices may be from his administration but seem to be spared.

“So, the public asked why it [Aquino administration] is being selective,” she said. “And the excuse was, of course, that these things can take time.”

Briones, a professor emeritus at the University of the Philippines, explained that “a very rich source of corruption” comes from the Priority Development Assistance Fund (PDAF), known as a pork barrel, because of its use primarily as political largesse to gain votes during elections. The PDAF was then given to politicians who funneled the funds through NGOs.

Each senator is entitled to P200 million in PDAF per year, while members of the House of Representatives can get P70 million each.

“Many politicians have their own NGOs run by the members of their own families. They can also do it [fund transfer] through regular government agencies, which are also in cahoots with them,” Briones said.

Last August, the Philippine Commission on Audit released a special report showing that several lawmakers were allegedly pocketing billions over the last 10 years from PDAF by creating ghost projects and dubious NGOs.

Janet Napoles, who obtained multimillion projects from various agencies and was named as the mastermind of the P10-billion corruption scam, was arrested. Five former House members and more than 40 other government officials and employees have been implicated.

Plunder charges were also filed against Senators Juan Ponce Enrile, Jinggoy Estrada and Ramon “Bong” Revilla Jr. for allegedly pocketing hundreds of millions of kickbacks from their PDAF allocations that went to alleged fake NGOs that Napoles had created.

According to Briones, the problem is that these PDAF appropriations were given to lawmakers in lump sums, as compared to other countries that would give assistance funds as part of their general appropriations.

The lump sums, she adds, are only “audited periodically, and therefore you only realize it too late that something fishy is going on and a lot of funds are already lost.”

“You can’t say outright that these get lost to corruption unless it is proven, but it is certainly vulnerable. These lump sums are very, very tempting. It’s like giving the apple to Adam directly,” Briones said.

The last PDAF audit was done in 2009. However, the Supreme Court recently ruled that the PDAF appropriations are unconstitutional.

The Philippines achieved the highest recorded GDP growth in Southeast Asia last year, and its corruption perception index standing in the world improved by 29 notches in three years.

According to the Transparency International’s Corruption Perception Index 2013, which ranked 177 countries from “highly corrupt” to “very clean,” the Philippines now ranked 94th, up from 105th in 2012 and 129th in 2011, with 1 being least corrupt and 177th the most corrupt.

Also, the Time Magazine released two years ago a special advertising section (http://www.timeincnewsgroupcustompub.com/sections/121231_Philippines.pdf) with a headline, “The Philippines: A New Asian Tiger Is Born,” and the New York Times reported (http://www.nytimes.com/2012/08/28/business/global/philippine-economy-set-to-become-asias-newest-bright-spot.html) that, with the growing young and skilled Filipino workers, the country can take the No. 16 spot in largest economy in the world by 2050.

Still, Briones believes that corruption has plagued the country’s economy, and that the latest corruption perception index did not include the PDAF P10-billion corruption scam.

Briones expressed frustration that the country’s “wheel of justice moves very, very slowly,” and cited graft cases that the courts have not ruled on despite the fact that the respondents had already died.

Corruption in culture and political dynasties

Corruption practices in the Philippines, Briones says, are rooted in Filipino culture and values.

“We have certain values system [that] may tolerate corruption,” she said. “If someone does you a favor and, because you’re being grateful, you need to return the favor to everyone.”

She also attributed corruption to political dynasties, which could lead to abuse of power and access to government, that have been ruling the Philippines for generations.

When Briones was asked what the Aquino government could do to combat corruption, she noted that it should “listen not only to the officials but also to the public” as well as “to their own opponents.”

“We are not lacking in laws,” Briones said. “We have the strictest anti-graft and corruption in the Philippines, but they are not being observed at all.”