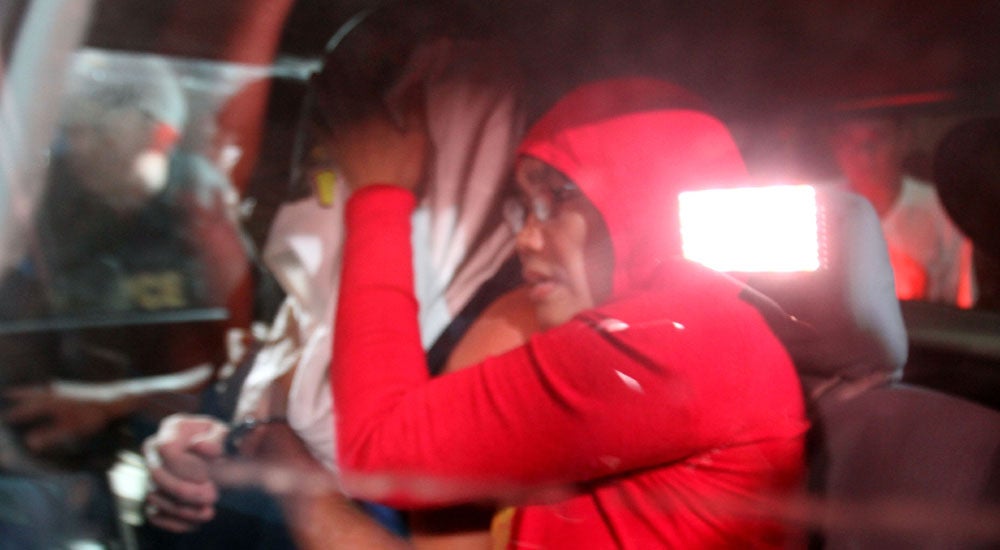 Retired US Navy surrender after taking hostage of a cashier of Paradise Apartelle in Timog Avenue, Quezon City. ARNOLD ALMACEN/INQUIRER

A sermon on a Sunday afternoon from a police official convinced a 57-year-old American to free his hostage at an apartelle in Quezon City and voluntarily give himself up, effectively ending a three-hour standoff.

Quezon City Police District (QCPD) Kamuning station chief Supt. Limuel Obon told the Inquirer that he was able to convince the lovelorn Robert Stasaitis, a retired US Navy man from Oregon, to let go of Alma Cordero, Paradise Apartelle receptionist, by telling him that he was better off than most people.

“I told him that he should not think of himself as hopeless. I reminded him about the victims of Supertyphoon ‘Yolanda.’ He is still healthy after all,” Obon said, adding that he was also able to convince the American that it was silly of him to resort to extreme measures because of love.

Stasaitis initially threatened to kill himself if his ex-girlfriend continued to refuse to speak with him. He later on decided to take hostage the cashier of the apartelle at the corner of Tomas Morato and Timog Avenues in Barangay (village) South Triangle, saying he would release her only if his girlfriend showed up.

Obon told the Inquirer that before the incident, which started around

2 p.m. Sunday, the American had been intent on slitting his wrists using a box cutter. “That is why he had a [suicide] note. He had been thinking of killing himself since Saturday night but [he] chickened out,” he said, adding that Stasaitis had been staying at the apartelle for five days.

But Stasaitis, who was drunk, saw the apartelle employee, grabbed her and threatened to cut her throat with the box cutter. 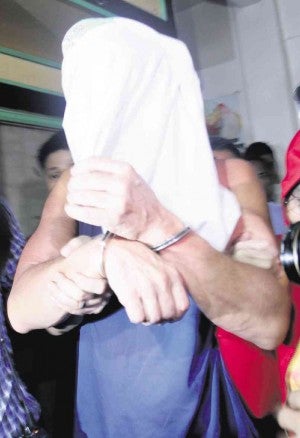 Retired US Navy man Robert Stasaitis is led away by authorities following his surrender after he took an apartelle worker hostage over matters of the heart. ARNOLD ALMACEN

Operatives of the Kamuning police station, the QCPD Special Weapons and Tactics unit and operatives of the Special Reaction Unit were immediately dispatched to the site with Obon as the negotiator.

Obon told the Inquirer that when he spoke with the American, the suspect had lamented that his girlfriend broke up with him last month after duping him of his money.

“I told him being dumped by his girlfriend was not the end of the world and that he has so many other things to live for,” the police official recalled, adding that his “sermon” proved effective as Stasaitis let go of the box cutter and surrendered around 5 p.m.

His ex-girlfriend’s brother, who asked for anonymity, told the Inquirer that Stasaitis had been in and out of the country for two years and that he had previously stayed in a condominium in Sta. Mesa, Manila.

“My sister left him on Dec. 14 because he has been drinking a lot. She advised him to change his ways if he wanted her to go back to him. She never cheated him of his money,” he said.

The American was taken into custody by the QCPD Kamuning police pending his turnover to the QCPD Criminal Investigation and Detection Unit.

Obon said that Stasaitis may be charged with alarm and scandal and frustrated homicide, and the apartelle could sue him for damages because its operations were disrupted due to the incident.

The QCPD Kamuning station, he added, had coordinated with the US Embassy over Stasaitis’ arrest.