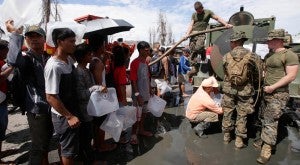 MANILA—Major donors to the Philippines’ response to the humanitarian emergency in typhoon-ravaged Eastern Visayas begged off from making any comment Monday on the reported overpricing of bunkhouses for people rendered homeless by the calamity.

The United Kingdom, the United States and the European Union withheld comment on the Inquirer  report on the padded costing for bunkhouses—temporary shelters regarded as critical in the continuing response two months since the emergency.

They are among the biggest donors to the relief effort, now entering its second month and gradually shifting to early recovery, including moving survivors from evacuation centers to bunkhouses pending the construction of permanent shelters.

The Manila embassy of the UK, the largest donor by far, did not issue any comment. British aid for typhoon relief in the Philippines has reached P11.1 billion, including contributions from both the UK government and private individuals, the embassy said.

The UK has also vowed to support reconstruction in Eastern Visayas over the long haul.

The EU has so far pledged $26.8 million or P1.18 billion, according to the Philippine government portal’s Foreign Aid Transparency Hub (FAITH).

The US embassy in Manila also did not comment on the issue. A US embassy official privy to American assistance said the embassy “did not contribute any funding for the construction of bunkhouses.”

The United States has either provided or pledged a total of $88.4 million (nearly P3.9 billion) in aid to support typhoon relief and rehabilitation in the Philippines, including $26.4 million (P1.16 billion) in additional funds that US Secretary of State John Kerry announced during a visit to Tacloban City last month.

The reported overpricing of bunkhouses in the Yolanda corridor came just as the United Nations renewed its call for greater donor support for the Philippines, citing low funding for the shelter and camp coordination and camp management sectors of the overall typhoon response.

A Jan. 3 report of the UN Office for the Coordination of Humanitarian Affairs said donors had contributed $608 million to the Yolanda emergency fund, including money directly provided to the Philippine government and amounts contributed to the UN’s Strategic Response Plan (SRP).

The SRP contributions have reached $328 million, accounting for some 42 percent of the UN’s appeal. The SRP is in line with the Philippine government’s Recovery Assistance on Yolanda program.

There has been a resounding public demand for transparency in the disbursement of foreign aid for Yolanda-affected areas since the onset of the emergency, particularly in social media.

The Philippine government has made several assurances that foreign funding will be used with prudence, even launching FAITH as a public portal for aid monitoring.