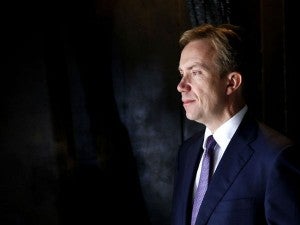 MANILA, Philippines – Norway’s foreign minister Borge Brende will make his first official visit to the country from January 7 to 9 and will also visit disaster-hit areas in Samar to see first-hand the Norwegian humanitarian and relief effort in the province.

“They will also discuss Norway’s participation in the country’s recovery from typhoon Yolanda (international name Haiyan). Minister Brende will visit Tacloban and Basey in Samar province to see first-hand the Norwegian humanitarian operations and assistance to victims,” Hernandez said.

According to the Foreign Aid Transparency Hub (Faith) website, Norway has provided $13.6 million (P600.5 million) worth of non-cash aid channeled through the Red Cross and the United Nations, and other non-government organizations.

Humanitarian relief workers and volunteers have also been deployed to the calamity areas.

“Minister Brende will also meet Presidential Adviser on Peace Process Teresita Deles to discuss Norway’s current role as third country facilitator for peace talks with the communist groups and its participation in the international monitoring team in Mindanao,” Hernandez said.

As of June 2013, there were 17,400 Filipinos in Norway mostly working as nurses, caregivers, engineers and housekeepers, the DFA said in its statement.

Norway is a highly developed country that is ranked as the second wealthiest country in the world and is currently first place in the United Nations Human Development Index since 2009.