‘US must pay more for reef damage’ 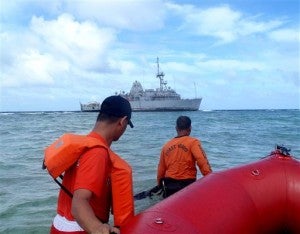 In this Jan. 22, 2013 photo released by the Philippine Coast Guard, coast guard divers approach the USS Guardian, a US Navy minesweeper, to assess the situation after it ran aground last week off Tubbataha Reef. AP FILE PHOTO

MANILA, Philippines—It’s all right if the United States has not yet paid the P58.3-million fine slapped on it by the Philippines for messing up the Tubbataha Reefs this time last year, because it has to pay more, a Filipino lawyer said on Saturday.

Lawyer Edre Olalia said the United States had to pay not only for direct damages but also for other violations of Philippine environmental laws and regulations due to the grounding of its minehunter USS Guardian on an atoll in the Tubbataha Reefs.

“We’re opposed to the paltry fine assessment made by the Department of Environment and Natural Resources. Those responsible for the destruction of the reef must be held liable. The United States should pay more,” Olalia told the Inquirer in a phone interview.

Olalia, secretary general of the National Union of Peoples’ Lawyers, is one of the lawyers of environmentalist and activist groups that filed in April last year a petition for a writ of kalikasan (nature) in the Supreme Court while efforts to extricate the USS Guardian from the reef were under way.

The petitioners demanded a fine more than 10 times the Philippine government’s assessment.

They compared the Tubbataha incident to the grounding of the USS Port Royal on a coral reef off Oahu, Hawaii, in 2009, which cost the US Navy $8.5 million in damages in addition to $6.5 million for repairing the reef.

Aside from compensation, the Philippine petitioners also sought a temporary environment protection order (Tepo) that would, among other things, prohibit US military ships from sailing in Philippine waters and making port calls without environmental guidelines and duties, as well as liability plans for breaches of those duties.

The case in the Supreme Court, however, has lagged due to the failure of the US government to comment on the petition.

The last pleadings filed by the petitioners in October included a motion for early resolution and for the issuance of the Tepo, Olalia said.

“When there’s a case in the United States involving the Philippine government, Filipino diplomats are trembling over there and our government would quickly comply [with the US court’s order]. But here, their counterparts are ignoring our courts. Is it because they’re a superpower? That’s why we have to change things,” he said.

“The question now is, will the Philippine government make a stand on this? We should be bold enough to assert our jurisdiction in this issue,” he said.

Olalia said he was wary about the Department of Foreign Affairs (DFA) statement that compensation talks were still going on between the Philippine and US governments.

He said the negotiations might become politicized and be “dribbled by the DFA” with Washington’s reported request for expanded access for its military to Philippine territory.

Olalia said that even if the US government paid the P58.3-million fine imposed by the government, the Supreme Court was free to increase it and impose other monetary penalties and other sanctions.

Asked about the possibility of the Supreme Court remanding the compensation assessment to a lower court or another government body issuing the corresponding guidelines, Olalia said the petitioners would be willing to wait as long as they were assured that there would be just compensation and Philippine jurisdiction would be affirmed.

Gov’t to ensure US will pay for Tubbataha damage

Cranes in place to lift US ship piece by piece; Aquino OK’s plan