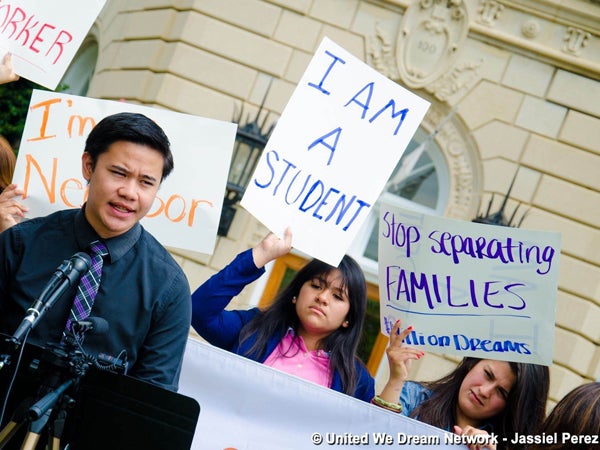 Raymond Jose speaks at a press conference across the Capitol after introduction of Senate bill providing millions a pathway to US citizenship, but would also enforce stricter deportation measures. PHOTO BY JASSIEL PEREZ. (UNITED WE DREAM)

NEW YORK — The US government deported about 369,000 immigrants, including a number of Filipinos, during fiscal year 2013, according to new statistics from the Immigration and Customs Enforcement (ICE) released last month, showing a 10 percent drop from the previous year — the first since President Barack Obama took office in 2008.

Nearly 60 percent (216,810) of the total deported immigrants, the year-end report (http://www.ice.gov/removal-statistics/index.htm) showed, had been previously convicted of a crime.

Of this number, ICE apprehended and deported 110,115 individuals with a crime conviction from within the country and another 106,695 at the border while attempting to unlawfully enter or re-enter the United States.

ICE officials described these figures as “meeting one or more immigration enforcement priorities” that the Obama administration announced two years ago, stating that his administration would no longer devote federal resources to deporting immigrants with “low priority cases,” including those without a criminal record and not a threat to national security.

“The 2013 numbers make clear that we are enforcing our nation’s laws in a smart and effective way, meeting our enforcement priorities by focusing on convicted criminals while also continuing to secure our nation’s borders,” John Sandweg, ICE acting director, said in a news release.

But the new removal figures provoked Filipino-American groups and other advocates for immigrant rights, saying that the numbers are misleading and that they don’t add up on Obama’s promise to stop unnecessary deportations, while Congress remains deadlocked on comprehensive immigration reform that will give millions of undocumented immigrants a path to legalization.

While it is true that the Obama administration deported criminals, advocates say, the report also revealed that it ousted 151,834 individuals without a criminal conviction.

Most of these immigrants only had immigration violations such as overstaying their visas, which is considered to be a civil offense, and those who are ignoring deportation orders.

“The government would claim that they have achieved its enforcement goal, and that they only look for criminals. That’s all rhetoric,” said Emelyn Tapaoan, a Filipino-American adjunct professor who teaches race and ethnic studies in New York and New Jersey universities. “If you’re undocumented, even with no criminal record, you have no immunity to deportation. That’s the truth.”

“It’s easy for the [Obama] administration to say that those deported fit their priorities when the White House has practically made sneezing a criminal act for immigrants,” Alvarado said. “These numbers may represent political calculus for the beltway but, for immigrant families, they represent our parents, siblings and loved ones.”

To date, the total number of deportations has reached to more than 1.9 million since Pres. Obama was first elected in 2008, the highest record by far for any U.S president.

While the Philippines was not part of the list— and the year-end ICE report did not mention its ranking— the population of undocumented Filipinos (270,000) in the U.S. remains to be the second highest, slightly after Chinese (280,000), among the Asian groups.

Asian immigrants make up 11 percent of the 11 million undocumented immigrants in the United States, living and working in the shadows.

According to the latest data from the U.S. Department of Homeland Security, about 4 million people born in the Philippines now live in the United States, and that 1 of every 6 Filipino immigrants in the U.S. is undocumented, mostly in key cities such as Los Angeles, San Francisco, New York and Chicago.

“Usually, what we have seen in recent years, a number of Filipinos face deportation because they have criminal convictions,” said Joemar Miane, a Filipino-American immigration lawyer based in New York City. “Most of their cases involve domestic violence and DWI (driving while intoxicated).

He also said that some undocumented Filipinos, although they did not commit a crime, ran into immigration authorities, say, getting randomly inspected at an airport or on the train during their travel. In turn, they get arrested and deported.

In other cases, he says, there are Filipinos with no criminal record but overstayed their visas. After filing a green card application, they also end up under removal proceedings.

“Their application would alert enforcement officers,” Miane added, “and soon they will receive a notice to appear, known as NTA, before an immigration judge.”

NTA is the first step to removal proceedings.

Miane said that, to avoid deportation, Filipinos and any other immigrants— both undocumented and green card holders— must not commit a crime, even if it may appear to be minor.

“Ninety-nine percent of those who got caught driving while drunk, especially with no proper documentation, may get a deportation order,” Miane said. “It just pays to be a law-abiding person.”

Aquino mum on TPS, leaves immigrants in the dark